For those that are infatuated with old school funk and have been aching for something to come along that would scratch your itch, look no further than The Music City Sessions, Volume 1, 2 and 3. This collection is packed with dozens of funk jazz songs recorded back in the 70’s from various artists and now un-earthed.

The story begins back in the 1950’s when Ray Dobard was the owner and operator of the Music City Label and Music City Record Shops in Berkeley and Oakland, California. His presence in San Francisco was well known as someone who really had their ear to the streets. So much so that groups like James Brown and even Motown paid close attention to what he was up to and many independent black labels came to him with their wares for his help in promotion in the Bay area.

Fast forward to the early 1970’s as Dobard then opened a recording studio in Oakland, California called Ray Dobard’s Music City Recording Studio which continued to pride itself in supporting “black popular music style” back from the early to mid 1970’s with their slant being primarily Soul, R&B and “hard driving funk”. While it seemed like an amazing breeding ground for some incredible music (which it most certainly was), it was also well-known that Ray Dobard always had a profit motive and that he took advantage of the musicians that recorded within his walls.  Most performers looked past it simply because of the influence and power that he had, but his heavy-handedness and the raw sound he pushed out couldn’t compete with the polished soul market that was ruling the radio. Unfortunately, his refusal to conform led to the lack of full potential for the bands and artists that recorded there.

The laundry list of names that participated in the recordings would be a Who’s Who in regional acts although some names like Victor Green have worked with national acts like Fats Domino, Lloyd Price and others. Others include bands that came into the studio from other places far and wide like The Houston Outlaws, The Soul Sensations, Music City‘s most prolific act The Two Things In One, and even the legendary funkster Darondo (who performed the classic “Didn’t I“) among many others.

If anyone remembers the soundtrack to Ralph Bakshi’s Fritz The Cat, this collection of songs is like a continuation of that sound and feel, but with more variation and more funk jazz swings. The quick tempoed funky clean guitar struts, mostly instrumental, are captured here and most of which are in their rare and raw form with all its blemishes and brilliance in tact.

Each volume features liner notes that are fulfilling to read as if you’re privy to the mysterious happenings at Music City and the stories that accompany each tune on the volumes. Stand out tracks like Super Strut, Disco Man, Giant Hamburger Part 2, Gumbo, Backyard and City Country City, all lend themselves to this incredible library of vast historical value. 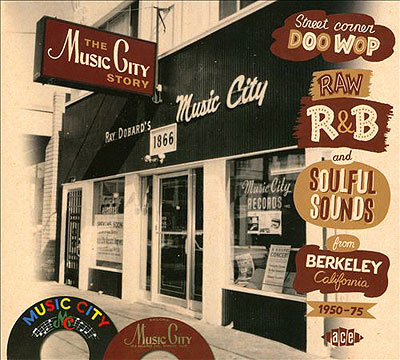 Of all three volumes, Volume 1 is the most cohesive of the volumes showcasing some of the most polished of the works available. The second volume showcases the more raw, funky and unfinished jams which many funksters are drawn to.  The third is primarily more of the same, but this time it features excerpts from the radio show announcements and lends more focus on the soulful slow jams such as Silly Song and the unusual Gimme Some where vocals swing back and forth from a Prince-ly falsetto into a Cameo-like delivery.

All 3 volumes collectively feature over 30 songs and most of which have never been heard before and performed by a hodge podge of musicians too varied to break down here. These songs are like the missing links of the funk world that have been discovered, remastered, and released in their rarest and purist form. This is a relic of funk history so important that it’s an equivalent to an archaeological find. Do nothing else, but head to http://omnivorerecordings.com/artists/the-music-city-sessions/ and get copies of these classic albums right now. As of this writing, Volume 1 is available and the other 2 will follow shortly.

We have no choice but to ordain this collection with 5 out of 5 afros. This is of historical signifigance and a must for any funk and funk jazz collectors. Get it right now.