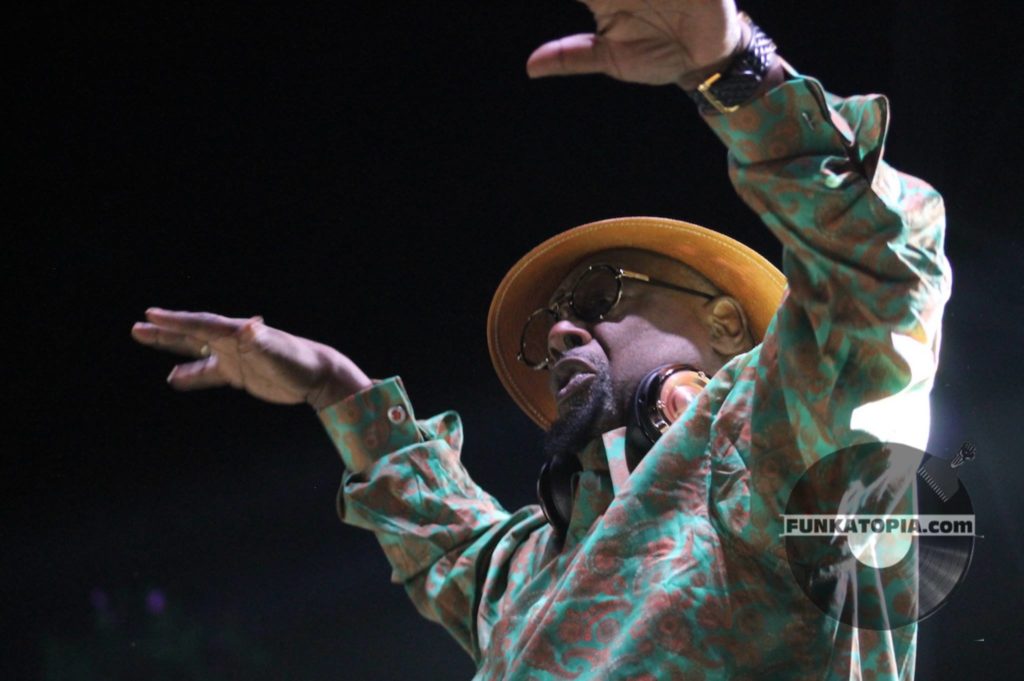 Before you read this, you need to know my stance with the Bear Creek Festival. I love Bear Creek and all of the musicians that are regularly involved, but something had dramatically changed this year. The attention to detail, the audience, the volumes of people, the marketing, and just the whole vibe. The level of talent you expected to see was still present, but the execution was disastrous.

I had been invited to attend Bear Creek Bayou in New Orleans for shows on September 29 and October 1 that brought headliners George Clinton and Parliament Funkadelic, The Flaming Lips and many of the Bear Creek mainstays including Lettuce, Karl Denson, Soulive, etc. It was too be held at Mardi Gras World to facilitate the large crowds that they had anticipated. 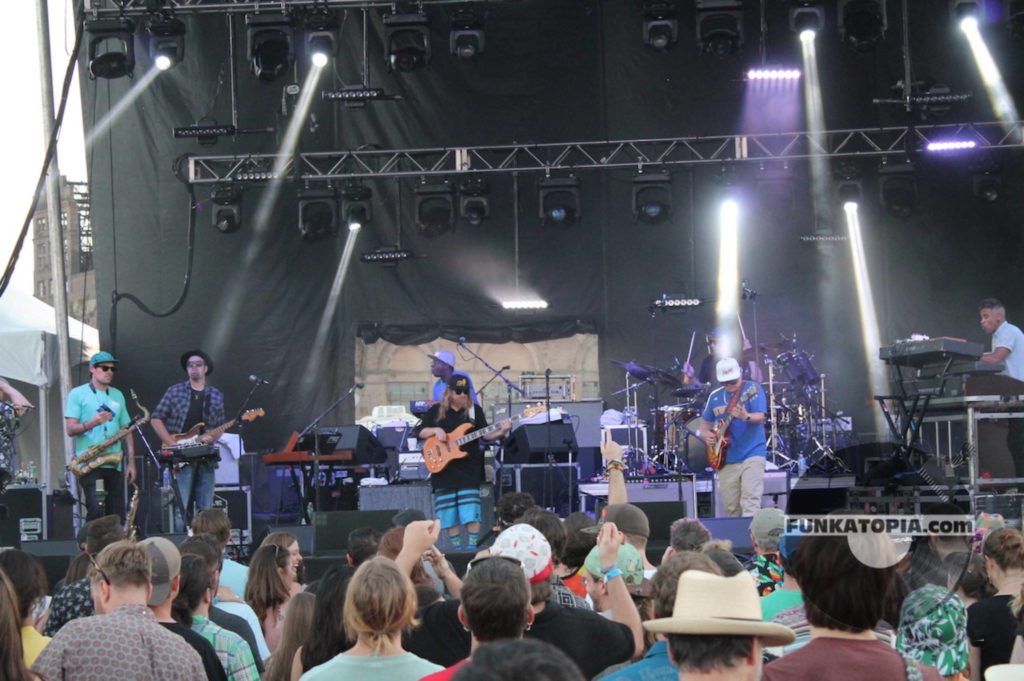 I should have written this review a week ago because all of the bands were magic, but the festival itself had taken an awkward turn and I debated on even writing this specific opening content.  If I ignored the glaring obvious issues and just wrote about the bands, I would have sacrificed my journalistic integrity. The pieces that literally everyone was talking about.

Fast forward to when the event was over late Saturday night on October 1st. Members of Dumpstaphunk were gathering together to do a benefit for Bernie Worrell at The Howlin’ Wolf with special guests from Lettuce, Soulive and others. It was going to be worth it to make it out.

I called Lyft to take a ride down to the club and during the small talk, she discovered that I was in town for Bear Creek Bayou and informed me that I just happened to land the same driver who had just got done taking the members of The Flaming Lips to another club just minutes before. 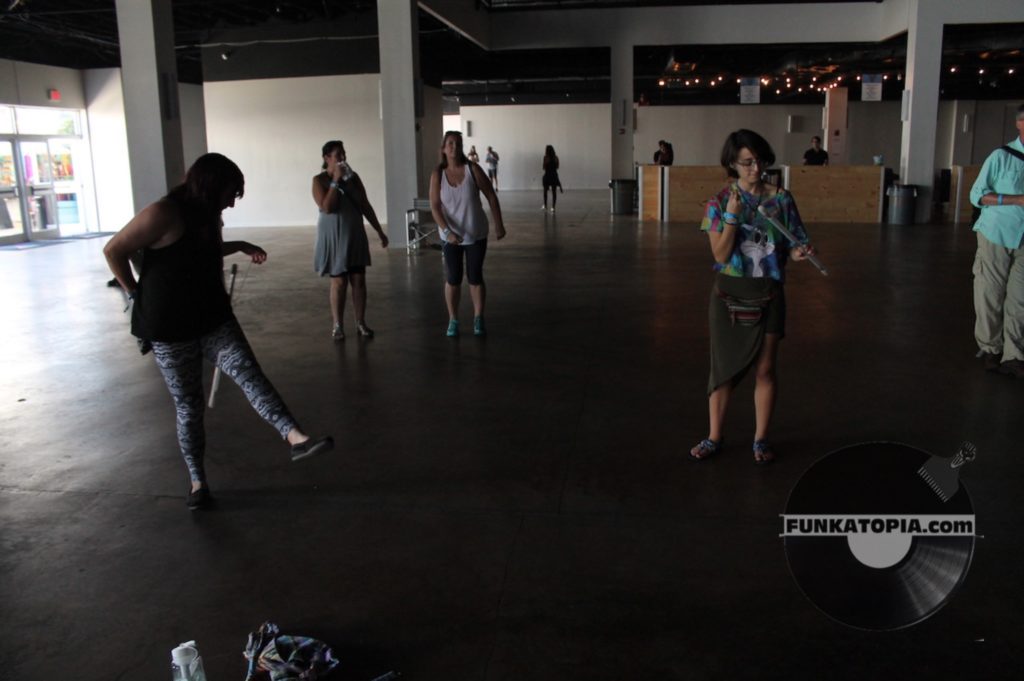 I didn’t share anything about details of the show, but she said it. “They seem like a fun band. But all they could talk about was how it was the smallest audience they had played for in years.” There it was. It wasn’t just internal murmurs anymore.

In essence, the festival isn’t just the bands. It’s the venue, the crowd control, the staff, the vendors, and other intangibles.  However, the most outstanding element on everyone’s mind’s was the attendance to the point where you thought that something may be wrong. The photo above was literally a majority of the crowd to see one of the inside bands. 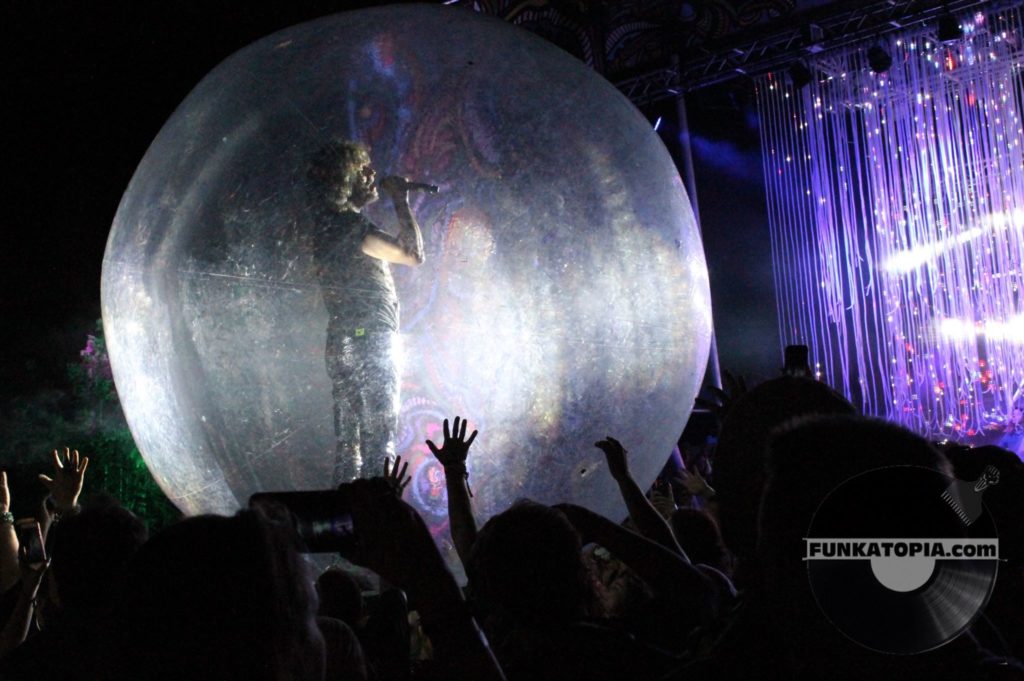 The Flaming Lips had just played for maybe 2,000 people? While it’s hard to gauge audience numbers, I was able to stand comfortably in the middle of the crowd and move around for photos without any problems.

This is a band that plays to a sea of tens of thousands of people pressed together like sardines. Bear Creek Bayou presented them to a crowd that was more along the lines of 2,000 at best and most were simply milling around enjoying the show. It’s great for the concert fan, but really bad for the festival. So what happened?

The truth is that the marketing was almost non-existent. Funkatopia is a funk website that brings in thousands of people to this website every single day. A targeted audience of funk music lovers. Plus we have an online radio show streaming from the website, as well as on mobile devices via apps for I-Phone and Android that pump out music 24/7 to thousands of listeners every month. And let’s not forget about the social media presence with thousands of Facebook and Twitter followers. All targeted to Bear Creek’s demographic. Music fans who love funk. 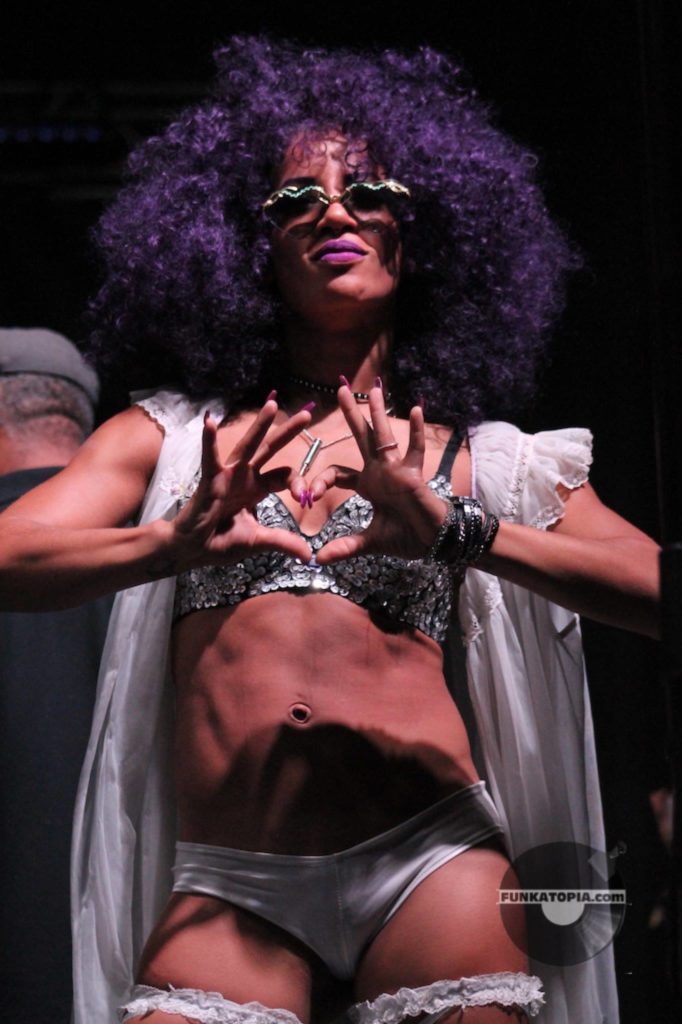 We offered access to all of the resources to the ordained marketing group that was charged to promote Bear Creek and were met with total silence. We had to send a dozen emails to simply get permission to even attend as press. We sent emails to our marketing contact requesting for them to send us banners, photos, interviews, giveaways, and even offered to do an “all Bear Creek” radio show to do a full blown broadcast promoting the event and its performers. Nothing.

We were apparently “lucky” enough to even be given permission to come in to take photos.

In a town that many have ordained as the roots of funk in the states, nobody in the New Orleans music industry that we had spoken with even knew that the Bear Creek event was happening. Music industry professionals we knew that would have loved to attend, but had no idea it was there.  Our online search for New Orleans concerts when we arrived produced no results with exception to the BandsInTown app. The end result was a fantastic musical event that very few got to experience.

This obviously had an effect on incredible lesser known bands like Smoke N Bones, Gravity A, Pirate’s Choice and others that played to their friends or a crowd of a dozen or less. Bands that should have been enjoying the opportunity to play for fans of the similar bands on the bill, but instead ended up with not much more than they could have gathered at their own local events.

All that being said, it was still great music with amazing performances that we hope is going to be able to continue in lieu of the shortcomings, but this certainly had to be a huge financial hit with the lack of marketing and worse, the lack of any substantial audience to come out and see the performers.

With exception to The Flaming Lips and George Clinton & Parliament Funkadelic, the lineup for the festival was the expected standard fare for a Bear Creek show. The funky cajun Zach Deputy, the ethereal funk of Lettuce, the hip hop stylings of Jurassic 5‘s Chali 2na, the darkness of The Budos Band, and driving force of Dumpstaphunk. They were all in attendance with exception of The New Mastersounds, but even guitarist Eddie Roberts still made an appearance with Foundation of Funk and bassist Pete Shand sat in with Bernard Purdie.

The bands also took an opportunity to try out their solo projects such as Dumpstaphunk guitarist Tony Hall performing a James Brown Tribute with the Tony Hall Band. Lettuce keyboardist and vocalist Nigel Hall had his own project as well. Drummer for The Nth Power Nikki Glaspie sat in her old drummer position for Dumpstaphunk and didn’t miss a beat. And even Lettuce trumpeter Benny Bloom had his own project with his Horns-A-Plenty. 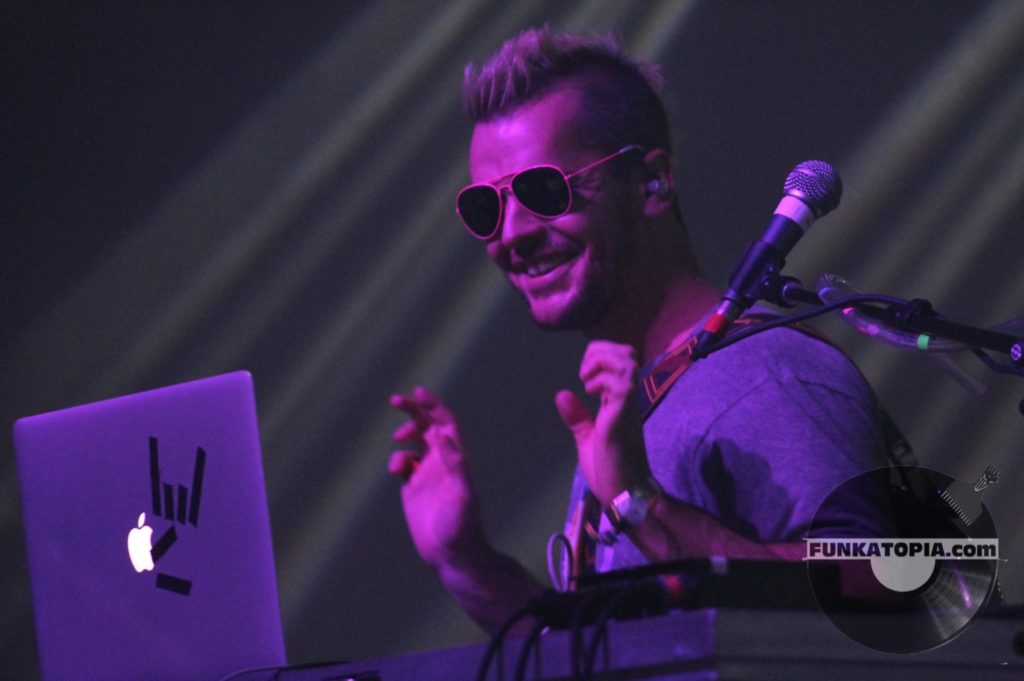 There were so many delightful surprises this year such as The Floozies giving a great tech set with amazing energy and bands like Papadosio and Lotus that played jams from alternate plains. Then there were the sleeper bands that caught folks off-guard like Flowtribe, Smoke N Bones, Pirate’s Choice and many others.

This years festival also had some great artists at large including Pee Wee Ellis, Jennifer Hartswick, George Porter Jr., Natalie Kressman, Skerik and others. Not to mention the great John Medeski, Zigaboo Modeliste, and many artists that weren’t even touted as “at large” but that still found their way to many stages including Ivan Neville and pretty much all of the members of Soulive.

The bands were allocated to three stages. Two of which were outdoors next to each other and when one would end, the next was right there to start seamlessly. The third stage, however, was indoors and seemed to be on its own schedule. That created about the only complaint musically which was the consistent overlapping of bands that pitted phenomenal acts against each other. Both vying for the already slim audience.

Why was it necessary to make us decide whether to see the Godfather of funk, George Clinton and Parliament or go inside to see the the formidable Bernard Purdie playing with an all star band featuring Ivan Neville on keys, Pimps of Joytime guitarist Brian J, and New Mastersounds bassist Pete Shand? 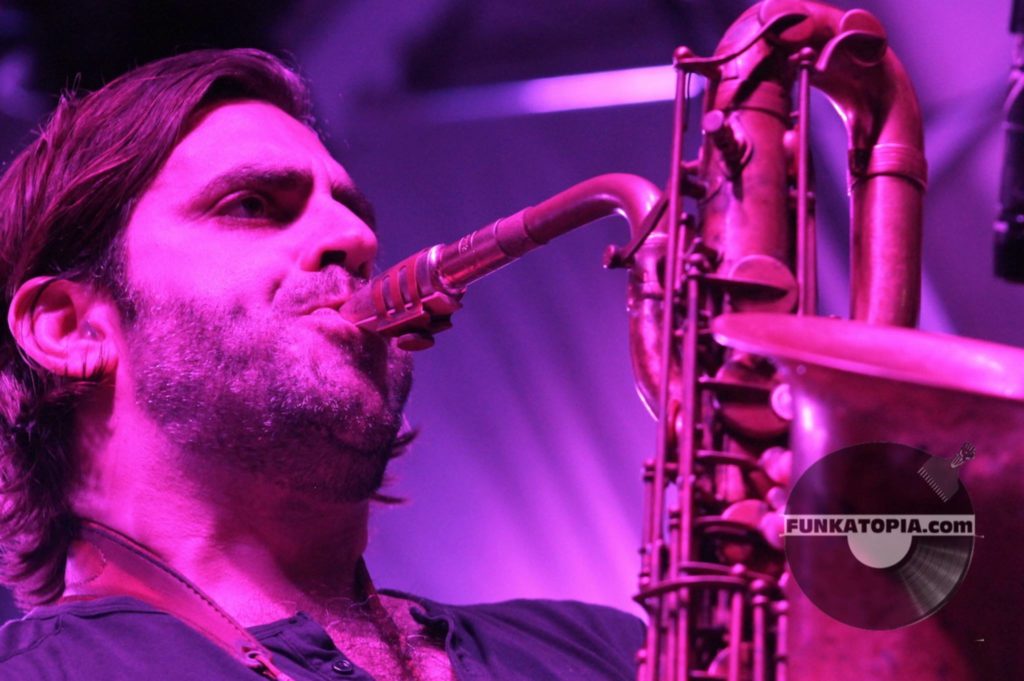 I spoke at length with many other press members there and we agree that the music was exceptional, but the conversation all ended up in the same place. Will there even be a Bear Creek next year? While we aren’t privy to the politics or financials, we did hear about a management change and we know first-hand that there was a marketing company change.

The end result was a great show, but it left a lot of questions as to the future of the show. We’ve said it before that Bear Creek is easily one of the best funk festivals out there and this year was no exception. The music is almost never a problem even if there were some strange additions that don’t really fit sometimes, but the finished product is always fun.

The marketing very simply was non-existent and probably the primary component to the crowd outcome. Because of our love for Bear Creek, we went way above and beyond to offer our resources to help promote the event, but it seemed that there was a wealth of disconnects and hoops of fire to jump through for their marketing reps to get the approvals they needed in a timely manner. Either way, somebody was asleep at the wheel or possibly even more terrifying is that maybe someone that’s an important link in the chain just doesn’t care.

Either way, if they can’t make enough money to stay afloat, then the fingers will start getting pointed and it could have disastrous consequences. It’s got us very, very worried, but we’re here to help in any way we can. Keep the funk alive!

Check all of the amazing photos via Facebook here.