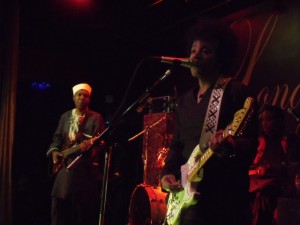 It’s hard to get a good solid feel for what Jesse Johnson brings to the table with his music until you’ve actually seen him live.  And for the lucky 50 or so individuals who caught him at Londzell’s in Roswell, GA on the night of January 13th, 2011, they will certainly tell you the same.

Atlanta was still recovering from its worst winter beatdown since 1993 bringing 6 inches of snow and mostly ice to the unprepared southern state with freezing temperatures keeping the roads treacherous and icy.  But that didn’t keep Jesse Johnson and his three piece band from bringing a show to Roswell, GA and those few dozen in attendance would soon be witnessing a show they may not soon forget. 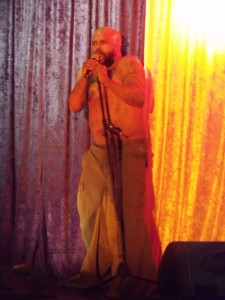 The night was threaded together by DJ Nez (Jesse Johnson‘s official DJ) who introduced opening acts Chaundra Nicole and Georgia Clay (aka Chip Maniac aka Theophius Glass). Chaundra is a new vocalist to the scene who wowed the crowd with amazing range covering everyone from Jill Scott to a jaw dropping rendition of Somewhere Over The Rainbow.

Not to be outdone, Georgia Clay, who most Atlanta natives have seen share the stage with George Clinton and the P-Funk Allstars as well as various other musical ventures, turned everyone’s heads with versions of Journey’s Faithfully, Terrence Trent D’Arby’s Sign Your Name, Pearl Jam’s Black, Gnarls Barkley’s Crazy, and an original tune called Broken Picture. 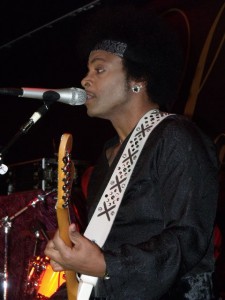 By the time Jesse Johnson hit the stage, most expected to see keyboards, synthesizers, horns, back up singers and the works that you would typically hear on a Jesse Johnson album.  But Jesse only brought 3 friends along due to the bad weather; Jeffrey Suttles on Drums and Del Atkins on bass.  The third was a background vocalist who stayed off to the side to help fill out the sound.  The result was a raucous mix pulling from every album from Jesse Johnson’s Revue through his new album Verbal Penetration.

The setlist was discarded in lieu of what Jesse referred to as a private party. “We figure that if you guys could brave this weather, we’ll just do a private party. Is that okay with everyone?”, Jesse asked.  Everyone approved and the requests began.  “You just call out the songs and we’ll play it, if we know it.” 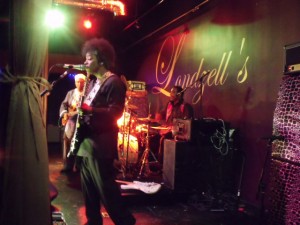 And on went the show for over 2 hours pulling slimmed down versions of Be Your Man, Free World, My Life, Verbal Penetration, Can You Help Me, I Want My Girl and many other rarities that wouldn’t have normally seen the light of day.  Jesse’s love for all things Jimi Hendrix came through in his fashion and hairstyle as he offered up versions of Little Wing, Crosstown Traffic and others.

There was very little cohesiveness to the evening that started out with some semblance of order but quickly became a musical journey into what felt like sitting in on a rehearsal.  It was an endless stream of songs, intermittent riffs, pieces of the past, segues and stories.  All in all, it didn’t matter since the night was filled with amazing music from front to back even though the evening didn’t seem to have any clear ending. 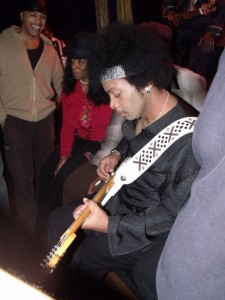 After playing for nearly 2 hours, Jesse sat on the front of the stage while people gathered around him asking him questions about songwriting, memories and bouts of sing-alongs.  Del stayed behind the bass and Jeremy brought the snare and stool up to the front to sit behind Jesse.  By this time, the crowd had widdled down to around 20 or so, but Jesse and the band kept on.  Jesse would play notable riffs from old Time songs like 777-9311 and Jungle Love, and the crowd would sing the songs while he played the part of their band. Meanwhile, he swapped stories of meeting Prince for the first time, talked about being roommates, cars they drove, songs they wrote, and many other 80’s memories that kept everyone hanging on every word to re-live the history that everyone there had come to see. An honest piece of Minneapolis history.

It was one of the most fantastic and rewarding concerts that I personally have ever been to.  For fans of The Time, you got your fill of the writer of most of those infamous riffs completely at your disposal.  Everyone received one on one attention from Jesse as he entertained questions about the past, 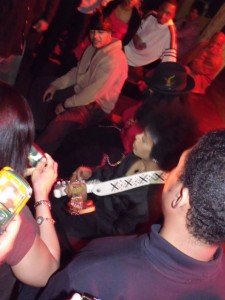 the upcoming new album from The Time, and whatever came to mind.

Most fans gushed about their past favorite experiences with Jesse’s music and Jesse listened intently while he played along with his guitar.  Not one autograph or photograph was denied. It was a true Minneapolis paradise for Georgia fans.

The next stop is Philadelphia on January 16th and anyone in the Philly area would be truly saddened to know they had missed the show. The Roswell, Georgia concert went mostly under the radar and was not a typical concert event. It was truly a private party and easily the show of the year even though the year has just begun.

Without a doubt, if we could give higher than 5 out of 5 afros, you would certainly see it here. Do NOT miss a Jesse Johnson show at any cost.

Can U Help Me?
Love Letters
U & I R We R Us
Black in America
Ali vs. Frazier
Instrumental
Little Wing
Stone Free
Hendrix medley
– Jesse sits on stage-
777-9311
Jungle Love
Crazay
Burn U Up
Various riffs and crowd Q & A 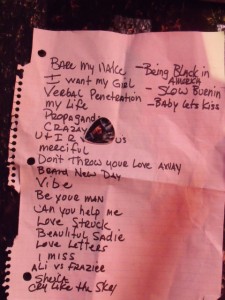