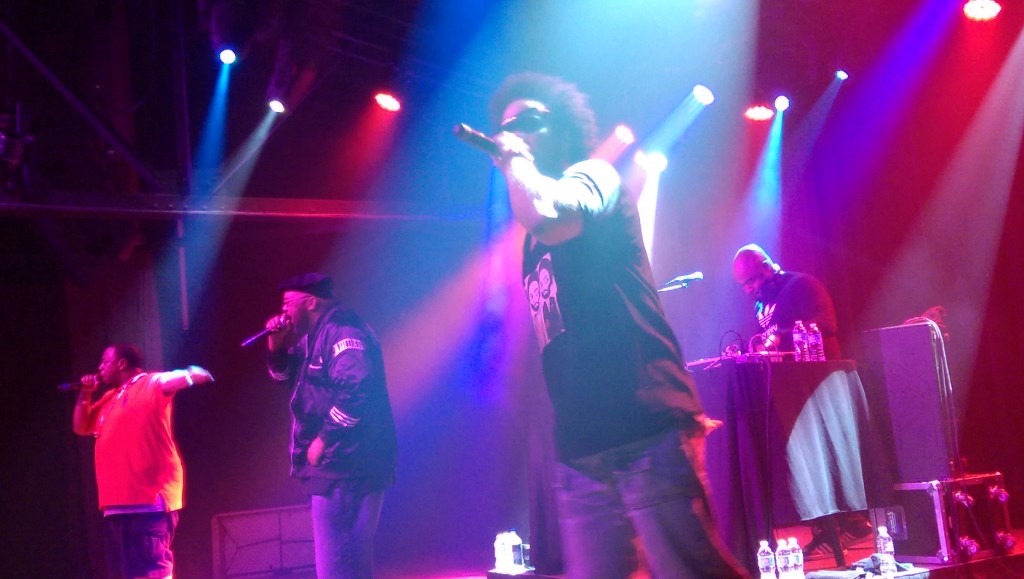 Many often wonder just exactly what’s left to prove for hip hop groups like Blackalicious. They not only come with deep socially conscious lyrics, but have been providing deep grooves with jazzy backdrops for 15 years now. With 3 albums under their belt starting with 1999’s Nia, they are trying to get back into the tour mode on the cusp of releasing a new album called Imani (which is Swahili for Faith).

The tour brought them through Atlanta and they made sure that the setlist was covered with tracks from all 4 of their albums (including performing tracks off of the yet to be released Imani). Their openers were local Atlanta acts Boog Brown and Illmont. Illmont was lucky enough to have Blackalicious‘s Gift of Gab join them on stage for quite a bit of their performance although barely anyone in the audience even recognized him in his casual attire until he was announced at the end of the show. It just goes to show how little people pay attention as it ended up being humorous to watch the crowd go from a callous attitude to a “CRAP! That was Gift of Gab?! I should have been paying attention.”  Luckily, we were.

Blackalicious took the stage around midnight and the length of the show seemed short. But however short the show may have been, Blackalicious filled the night with sing-a-long songs from all of their albums including breaking out new tunes. It was a lot of material to choose from and even considering that Gift of Gab has solo releases of his own to pull from, they certainly were not short of material.

The only surprising factor was that we expected Blackalicious to be backed by a full band and those were probably unrealistic expectations. Blackalicious has been known to build their songs with great music and laid back grooves, so it just felt a bit anemic. Luckily, with Gift of Gab and the Lifesavas at the helm, the experience was still way beyond the price of admission.

Gift of Gab has a very demanding voice that borders between authoritative and comforting at the same time. And when he enters his spitfire speed rapping, there simply is no comparison and he hasn’t lost much vocal stamina over the years. Rounding out the quartet of Blackalicious are Lifesavas members Jumbo and Vursatyl who complement Gift of Gab well with their quick hit one-two punch rhymes. Additonally, Jumbo does a lot more than just rhyme as he does quite a bit to keep the crowd involved by fist bumping with the audience and keeping everyone attentive which can be a feat in itself.

And of course you couldn’t wrap up a review without talking about DJ Chief Xcel. While he may have pulled back on a lot of the normal DJ scratching and cutting cuisine, he’s still a force to be reckoned with. Even with the untrained eye, you would still be quick to note that there is a stark contrast between the DJ work of someone like Public Enemy‘s DJ Lord and Chief Xcel. Chief Xcel keeps the flow going and has some stand out moments during the show where he gets to show off his skills. But someone like DJ Lord seems to be “always on” and is constantly scratching, and cutting where it almost seems like there aren’t any shortcuts pre-recorded and that it’s all done on the fly as with any instrument. It certainly doesn’t detract from Chief Xcel‘s show, but his style and flow is vastly different and it works well for what Blackalicious does. You’d also have to consider that Xcel is one of the core producers of almost all of the material that we’ve grown to love from Blackalicious.

All in all, if you have a chance to catch Blackalicious in a live setting, it will be worth the price of admission although it will only make you more anxious for the arrival of the new Imani album that is already almost 2 months past due from previous announced dates. Gift of Gab‘s teasers on the performance of the song Blacka (see below) from the new album is simply followed by “Coming Soon“, but like their live performances, it simply can’t come soon enough. We give Blackalicious‘s Atlanta performance 4 out of 5 afros.

Check out Blackalicious performing Blacka below and then click here to see even more videos from their Atlanta show.