Prince upsets the balance again by pulling his entire music catalog off of streaming services like Spotify.

In a huge move that will certainly shift the industry, Prince has removed his catalog from every streaming provider except Jay Z’s Tidal service. Previously, only albums released on the Warner Brothers labels were present and anything beyond that starting from Emancipation all the way to the new 3rd Eye Girl & ART OFFICIAL AGE releases were never present. But now, everything is gone.

People searching for any of Prince‘s songs on Spotify will find a very heartdropping message that states;

“Prince’s publisher has asked all streaming services to remove his catalog. We have cooperated with the request, and hope to bring his music back as soon as possible.”

Many speculate that the reasoning for it is twofold. The first being that Prince has been very animate about wanting to focus more on supporting black owned businesses moving forward. A statement supported by a speech he made during his performance in Baltimore. Which not surprisingly enough, was also broadcast exclusively on Tidal.

The second reasoning is that for even longer, Prince has railed on the streaming services for ripping off artists by paying them fractions of a penny for song plays. A passion that many artists agree is an unfair practice. Additionally, he’s made it very clear that he’s not happy with the practice of streaming music paying the labels twice and not the artists themselves as made evident on Twitter. 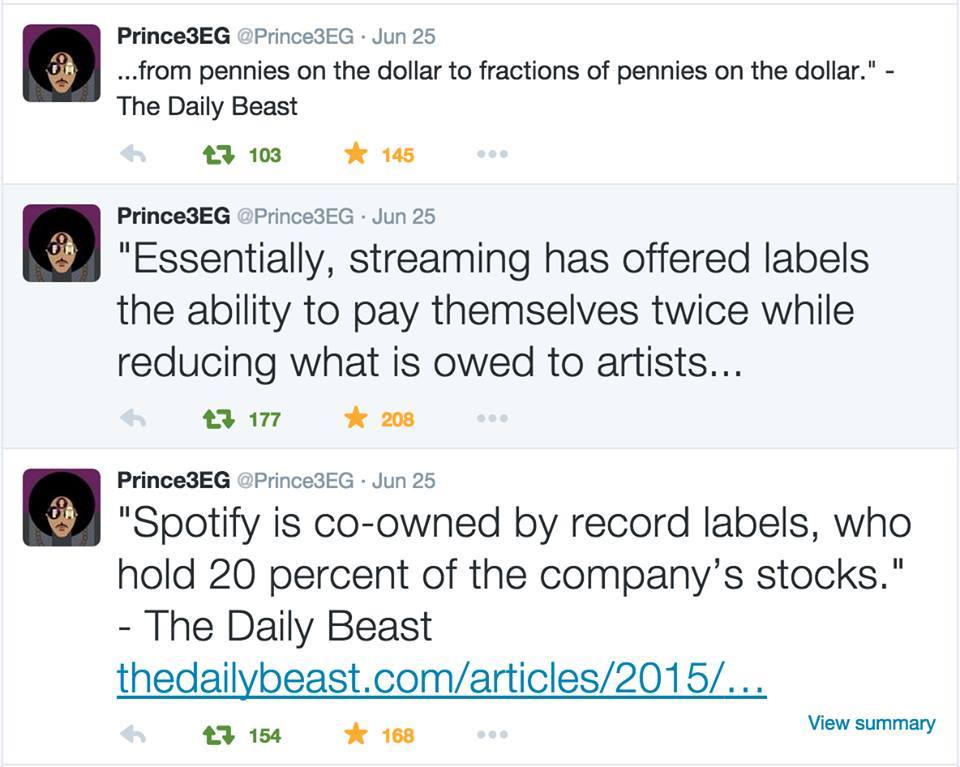 And all of which is surprising, since Tidal, while a tad more artist friendly, it is still leaned towards the streaming provider’s pocketbook (or wallet) and not a much better payment model than anything else.  If this truly is the reason for the walk out, it would behoove Tidal to take advantage of this marketing opportunity and tout the benefits of the “more artist friendly” service over their competitors.

Regardless of the reasoning, one could only imagine that if it is indeed the latter reasoning, Prince may once again recreate the music industry by renegotiating contracts with the streaming music providers to increase the artist share of song plays which will have a ripple effect for all of the artists on those platforms.

Once again, a new precedence looks to be on the very near horizon. And once again, it’s set by His Purple Majesty.