I’ve always been a fan of Donald Glover and outside of Because The Internet and “Awaken, My Love!”, I hadn’t paid much attention to his musical career as Childish Gambino. But even the pieces I did pay attention to were extremely impressive. “Awaken, My Love!” was not only a funk masterpiece, but it also got the attention of Questlove who couldn’t contain himself to the point of waking up D’Angelo in the wee hours of the morning and making him listen to the album. And he was rightfully justified in his excitement. Nonetheless, you had to wonder if any of this would play out in a live setting, and WOW, did it ever.

The venue is the Infinite Energy Arena in Duluth, GA which is about 25 miles northeast or so outside of Atlanta and it was packed. While I could go into the details of his opening act Rae Sremmurd, I won’t. The contrast between the two acts is palpable. Rae Sremmurd is very much a rap act featuring Swae Lee and Slim Jxmmi bouncing around stage (and sometimes falling off of the stage) half naked, pants mid-thigh with their boxers hanging out, and rhyming over tracks of their radio hits like Black Beatles and Swang. Which is perfectly fine and not meant as a negative, because they put on a good, energetic show. However, the only similarity to their headliner is the half naked part. 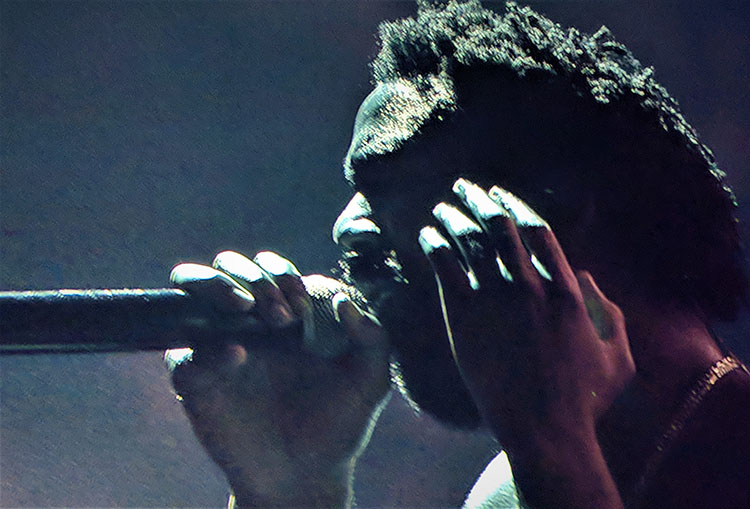 Childish Gambino came to the stage in light brown corduroy pants, tight afro and full beard and he stayed that way for the entire show. No costume change necessary. He has pitch perfect falsetto, high pitched screams that are eerily reminiscent of Marvin Gaye. Even his bearded look was literally like looking into the eyes of Gaye himself and when he sang in those high pitched screams and moans, it was just about as close as you could imagine a resurrection of Marvin would look like.  There were multiple times I watched the screen close-ups and thought, “This is Marvin Gaye reincarnated.”

Only on “Awaken, My Love!” and his recent singles has he truly dabbled in doing full albums showing off his vocal prowess and it is fantastic. When that album landed, everyone was caught off guard since his fans were expecting more hip-hop ditties, which was marketing genius since there was no advance notice of the drastic departure from the formula he had perfected on his previous albums.  This show was without a doubt focused on showcasing his singing, but sprinkled with enough rap to keep both audiences satisfied.

The set was full of his well known hits like 3005, Summertime, Sweatpants, Redbone and the controversial new banger This Is America.  He also threw in some new songs that he had literally dropped the night before via email strictly to ticket holders called Algorythm and All Night.  Donald was backed by a full band in the stage pits which definitely added a meaty raw full sound as opposed to performing over backing tracks.

The T-shaped stage allowed him to come out into middle of the audience and get close to a lot of his fans including one moment where the camera followed him backstage and he went down hallways and up 3 flights of stairs only to appear in the lobby of the arena and then come down into the 2nd level of seats and perform a song for his parents who were in attendance.  All while standing in the middle of screaming, adoring fans.  It also seemed that this most certainly was being filmed for future release due to the lack of press and also the multitude of cameras everywhere.

It’s difficult to say whether or not all of the shows on the tour will be like the one performed in his hometown of Atlanta since the setlist was diverse and drew from multiple points in his career. Even if you weren’t familiar with his music at all, you would truly have a fantastic time with a performance that screams its 70’s soul influences, but has dashes of enough pop flair and current influences to speak to pretty much every audience with its summer feel good vibe. This is without a doubt a 5 out of 5 afro experience.