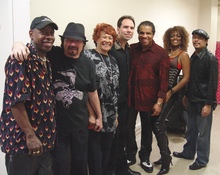 Amidst the debacle of the various Sly Stone appearances that haven’t gone too well, The Family Stone seems set to keep pushing on regardless of the circumstances. Anyone can see from the concerts that The Family Stone is the band that holds everything together even when Sly Stone is falling apart.  However, that doesn’t mean he won’t make more appearances, but you never know when. One would guess it won’t be at a small venue like a fair.

According to the Solano County Fair website, The Family Stone will be making an appearance in Vallejo, CA coming up August 5th.  Various ticket sites like Ticketmaster haven’t even picked up on the event and it appears as if tickets are only being sold directly via the Solano County website. No mention as to whether Sly will make an appearance, but since there is no mention, probably not.

Funk fans will definitely want to attend regardless of a Sly cameo since most of the show will be funkafied goodness for a mere $8 general admission. Hopefully our California friends will let us know how it all goes down.