Jazz inclinations in the funk realm seem to be a natural by-product of our music genre. A trend that was started many decades ago, but none so blatant as when Prince unveiled the Madhouse project unto an unsuspecting audience and then began latching onto jazz greats that even crossed brains with the late Miles Davis. Now the jazz funk fusion almost seems as natural as peanut butter and jelly.

Jesse Fischer and Soul Cycle could very well be a direct descendants of the funk-jazz movement as they body slammed Atlanta on February 9, 2013. A big thanks to Questlove and the Revivalist for the tip. Tripping through a mixture of songs from his new album Retro Future and the Homebrew album, there was perfect mixture of funky offshoots like K.C. Bounce and Dark Waters all the way through to their unmistakable jazz counterparts that even included covers of You’ve Got a Friend and Aquarius. 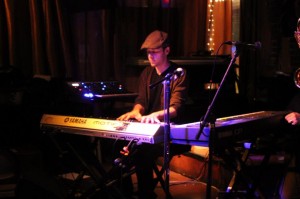 The band featured Jesse Fischer on piano and keys, Brian Hogans on alto sax, David Cutler on bass, and Justin Tyson on drums.  Each musician got their fair share of solo opportunities and all of which left the audience slack-jawed and out of breath. The band is an aspiring musician’s nightmare as each band member is a literal virtuoso on their instrument which only leads to musicians simply wanting to call it quits. The desire to aspire to this level of musicianship is a tad hard to swallow.

The live versions of the songs were almost always doubled in length leading to the band to opt for a 2 set show playing until the wee hours. It’s almost impossible to describe the level of musicianship that exists with the Soul Cycle collective and even more impressive considering that Jesse’s band is almost always filled out by fellow Atlanta musicians that aren’t his full time cohorts. A habit that most jazz bands utilize when traveling the country, but very few to this amazing effect.

Outside of the awkward split set show, which actually added to some of the intimacy, the only disappointment of the evening was the club lighting which made it incredibly difficult for photography and almost sucked the energy from the music. The stage was dimly lit with yellow par cans and other muted colors and none of them were set correctly leaving all of the artists in dimly lit sections of the stage. And with no lighting activity at all other than “on and off” (and even that was only after the sets were over), it was truly an antithesis to the music.  Unfortunately, that is the norm for Apache Cafe.

Needless to say that there is no room for improvement in a Jesse Fischer and Soul Cycle show, so if you have a wanton insatiable desire to be filled with the Holy Ghost of funk-jazz, this is where you would go. Head to www.jessefischer.com and sign up for their mailing list to find out where they’ll be playing next and then get there at all costs. And don’t forget to visit our Facebook page for a complete collection of photos that we were able to eek out even amid the bad lighting. Oh and even a video clip you can check below. Just get there. We give it a 4 out of 5 afros.