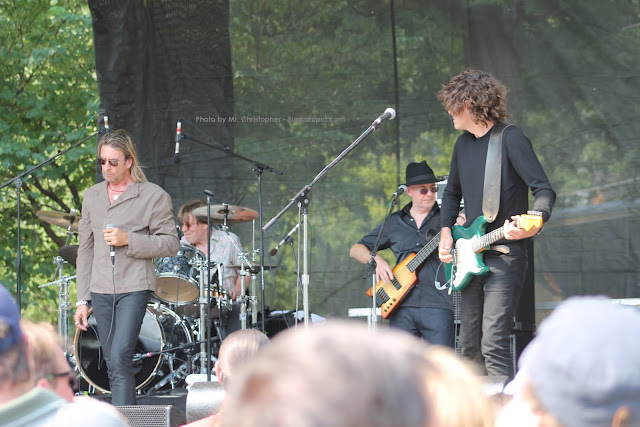 They’re baaaack! The band that ruled the roost in the 80’s still has plenty of chops to spare. Check out the tons of photos here.

The band named The Fixx that forever will carry the title as “that band from the 80s that does One Thing Leads To Another” is returning to the road with the funky bass riffs turned up full blast.

While we are well aware that The Fixx isn’t a funk band, it’s hard to deny them the coverage that they deserve when they deliver some of the funkiest bass lines this side of the pond. Songs like The Fool, the aforementioned One Thing Leads To Another, Saved By Zero, and many others have some of the most solid riffs that rival almost any funk tune you can throw at it.

Local radio station Dave FM touted it as the original lineup, but some purists will call out the name of Alfie Agius as the original bass player (and Barret before Agius) even though Dan K. Brown has served as bassist extraordinaire for most of the bands most successful albums including their infamous Reach The Beach (with exception to Agius playing bass on the album’s biggest singles One Thing Leads to Another and Saved By Zero).

Dan took a leave of absence for many years due to health problems that kept him from touring with the band even though his shoes were aptly filled by some good players over the years like Chris Tate.

The Fixx were in rare form at the outdoor event entitled Virginia Highlands Summerfest and the crowd was estimated at a thousand or more. They covered all of their most famous hits you’d expect as well as covering their cult classics like The Fool, Yesterday, Today, and Woman On A Train. The Fool was particularly interesting as The Fixx showed off their psychadelic muscle and gave hardcore fans a 7 minute version of the song. 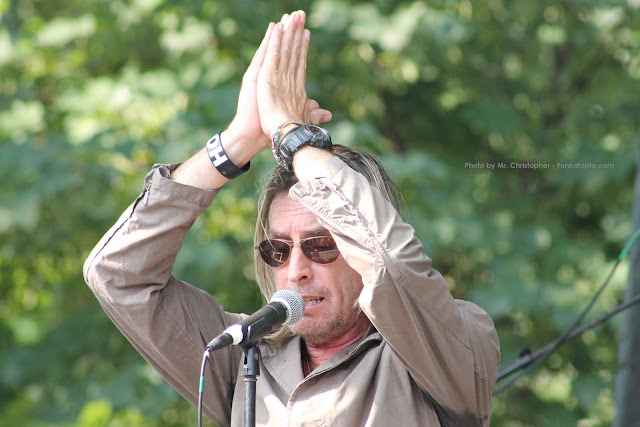 Lead singer Cy Curnin was unusually spry and in good vocal form even though some were taken aback by profanities that have rarely ever come from the stage at their previous shows including an F bomb. Cy did offer up some of the quirkier movements and hand gestures he’s been known for over their 30+ year career, but very much subdued from his earlier hey-days. And he made sure that he shared his views on politics, the Queen, and British flags made in China.

Dan K. Brown was in great form back behind the bass as he has been for a few years now keeping fat riffs and chunky bass lines in the backbone, but his performance remained stage rear for the entire show. This is similar to what his shows used to be during the 80’s and 90’s where he became known as the “unmoving bass player” who stayed stiff as a board with exception to his hands. That act is gone and replaced with a standard rear-stage performance, but still masterful and well received on songs such as Yesterday, Today and the new Just Before Dawn that allow him to show off his beastly riffing.

Guitarist Jamie West-Oram was spot-on with background vocal duties and atmospheric guitar solos. His trippy solos from the aforementioned The Fool and Woman On a Train were a welcome gift to the fans. And the newer songs were more risky and rocky than their older material which is surprising and refreshing at the same time.

Drummer Adam Woods kept his chops very consistent and smooth throughout the evening as well. Our pre-show discussion with him indicated that he was in good spirits and his time keeping is as impeccable as ever.

Keyboardist Rupert Greenall is getting more adventurous over the years. In past shows that we’ve seen, he always seemed to stick to the script and a tad nervous, but the Highlands performance had him very confident trying new sound patches and effects which mixed things up nicely for the hardcore fans.

The tour is about to go full swing to support a brand new album called Beautiful Friction due out July 17 2012 with samples available on Amazon to check out. They played a few songs off of the recording (see set list below) and all of which were upbeat and more adventurous than their previous  offerings which unfortunately found a very limited audience.

For Atlantans, Adam Woods shared with us that the crew will be back through Atlanta in the Fall and their U.S. tour takes them to the Northeast into Connecticut, Massachusetts, New York, and even Teaneck, NJ. Then they head west over towards Oregon, Minnesota, Illinois and California. The 2nd Atlanta date Adam mentioned is nowhere to be found on their site, but we hope it materializes on their tour page here.

For fans of this band, they haven’t lost any of their musical spunk from the 80’s and their new songs are clean, crisp and filled with political and religious intrigue as you may have come to expect. What’s even more exciting is that they’re back to their old style with Dan K. Brown back behind bass as the samples they’ve shared are very reminiscent of their critically acclaimed Phantoms album and it sounds as if we can expect more of the same.

And yes, we know it’s not funk, but these guys are pretty damn hard to ignore. Don’t forget to check out the massive collection of photos we took of the show. Check out the tons of photos here.

Intro
Red Skies
Take a Risk (New Song)
Driven Out
Yesterday, Today
Anyone Else (New Song)
How Much Is Enough?
One Thing Leads to Another
The Fool
Just Before Dawn (New Song)
Deeper and Deeper
Woman On a Train
Stand Or Fall
Fatal Shore
Saved By Zero
——-Encore——-
What God? (New Song)
Are We Ourselves?
Secret Seperation