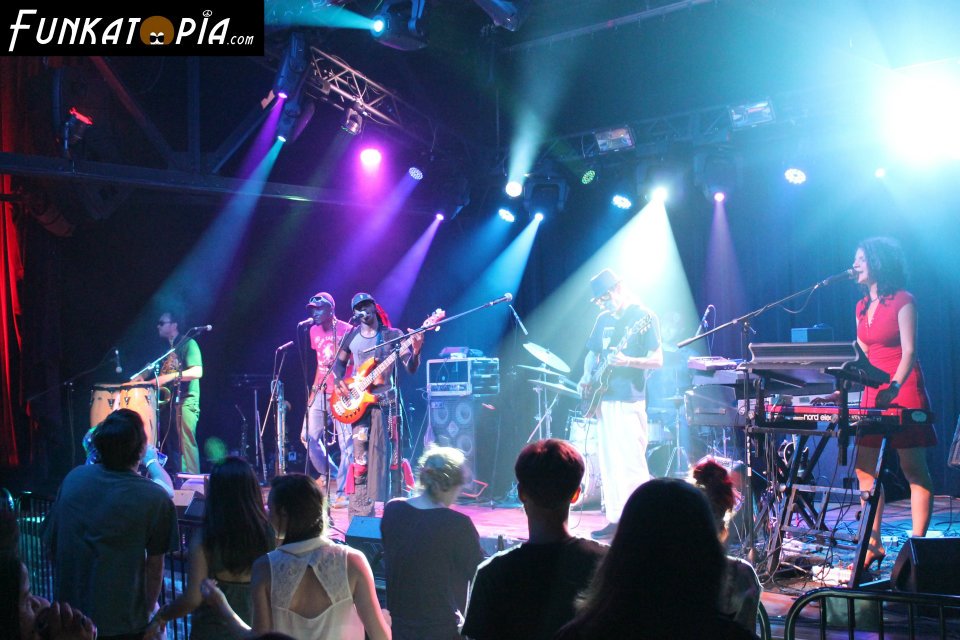 Don’t forget to check out our exclusive interview with Yo Mama’s Big Fat Booty Band here!

When you first hear the name Yo Mama’s Big Fat Booty Band, you immediately think, “These guys are marketing geniuses.” But more importantly, you would ask yourself if they have the chops to back it up. Luckily for the Southeastern United States, they do. 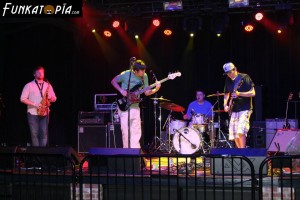 The night began on June 15, 2012 at Terminal West at King Plow with opening act Soul Mechanic. While their set started off nervously, they eventually stepped into their groove and showed off their musical prowess. All 4 members of Soul Mechanic are extremely talented musicians. The type of musicians that are so comfortable with their instruments, that they’re simply feeling them and losing theirselves in the delivery. They were also graced with a couple of members from YMBFBB during a cover of Sly Stone‘s Thank You.

Soul Mechanic is funakfied goodness wrapped up into an almost Dave Matthews Band vibe delivering quirky rhythms, funky intricate bass lines, snappy drums, technical guitar riffs and smooth sax fills. Their strength is in their instrumental prowess more than the vocal deliveries and if they built out their vocal harmonies (which are woefully absent), their rise will be meteoric. 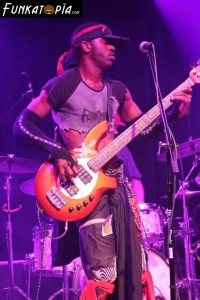 By the time Yo Mama’s Big Fat Booty Band (YMBFBB) hit the stage, the crowd was ready. Each member of YMBFBB has a laid back feel, but bassist & vocalist Al Al really gets into the marketing of the band with his over the top outfits. Tonight he donned a half shirt, a black sun visor with a black doo rag that draped all the way down to the back of his knees, and black jeans mangled and accessorised front and back. The remaining members played the safe t-shirt and jeans route with exception to the lovely Mary Frances who performed as the lady in red for the evening and J.P. Miller who opted for a light colored slacks.

The night was filled with their funk hits covering their 10 years in the business and was well accentuated with a wealth of new material from their new Doin’ It Hard album including the 10+ minute psychadelic trip that is Shadows & Sunshine. The band loves to relish in the free form and live in the melody as opposed to sticking to a song’s standard arrangement. 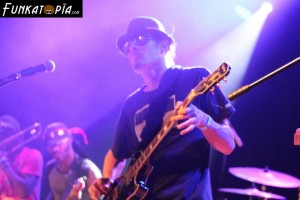 Vocal deliveries were solid throughout the evening with Al Al settling into his new songs more comfortably than even on recordings. He is also much more comfortable in doing the sound effects like chatter and laughter and becoming the “character” of the band as compared to guitarist JP Miller‘s “straight up” guy. Mary Frances delivers some great knock-out-of-the-park performances including a smooth adaptation of their new song Lovin, but everyone seems most in their element during instrumentals where they can merge with their instruments and not have to focus on the vocals.

The evening clocked in at almost 2 full hours and for a lot of lucky fans who stayed after the show to dance, the band came back out yet again 20 minutes after their set ended and performed a 3 song set of Dr. Dre songs. At that point, the crowd was insatiable, but was very much quelled once YMBFBB chewed them up and spit them back out. 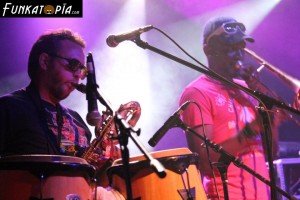 All in all, we found that it was well worth the price of admission to take in their healthy dose of funk. We also captured a lot of the moments on our Facebook page including dozens and dozens of photos and some video clips (including the long 12+ minute Shadows & Sunshine).

So head there to experience what the Booty Band has to offer and check out an upcoming show. Visit their site at http://www.bootyband.com to find out where they’ll be, buy some merchandise, and get your funk on. Plus it’s highly suggested to head to Amazon.com to pick up their brand new album Doin’ It Hard.

We give this concert a 4 out of 5 afros.