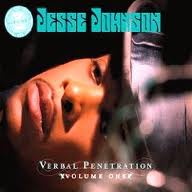 Review: It’s tough to keep an unbiased review of anything related to Jesse Johnson since his legendary status in funk music is felt all across the music industry. Verbal Penetration is Jesse’s first jump back in the murky depths since 1996’s Bare My Naked Soul (BMNS).  Like BMNS, Verbal Penetration is a continuation of the rock peppered guitar heavy prowess that he has become very comfortable delivering and his fanbase definitely appreciates being able to really hear Jesse’s guitar the way it was meant to be heard.  Only recently has Jesse begun touring to support the album even though the album has been on virtual store shelves for over a year already.

That being said, there are a lot of hits and misses on Verbal Penetration.  Moreso on Volume 2 than Volume 1.  Volume 1 of VP seems to be the best picks of what he had to offer on this outing, while Volume 2 almost came across as an afterthought or “leftovers” CD.  Volume 1 is full of instant hits such as the title track, Propoaganda and 100 Watts of Funky. All of which have the standard funkified riffs everyone loves Jesse for.  But there’s also a overpowering strange presence of what appears to be unnecessary ego-maniacal diatribe throughout the entire album.

Case in point would be the multiple canned references to his “greatness” such as various poorly read/acted excerpts from women making comments such as “Wow, where do I start?  We have a very special guest today. He is an extraordinary guitar player..“, and girls woo’ing “Look it’s Jesse Johnson“, and even an entire 8 minute track entitled Redemption For the Soul which is a story told by a French accented woman about some country that has banned music.  The story continues that a group of music-listening rebels have excitedly gathered in a secret location to listen to Jesse’s new album and are caught by the music-hating government from hidden mikes in the room.   But instead of said government arresting the rebels, they simply want a copy of the album.  It’s a bit much.

Volume 1 is very well done and would easily garner a 4-1/2 out of 5 afros, but Volume 2 is actually detrimental to the collection.  It doesn’t have the continuity of the album and just feels thrown together like a bunch of B side riffs that he simply didn’t want to throw away.  And the added ego bits are unusual since Jesse is extremely open and approachable in person.  It’s out of place and out of character.  Volume 2 does have some pieces of genius such as In The Key of Nudity and Ali Vs. Frazier, but overall it simply lacks any consistency.  It just seems as if the better bits could have been stuffed onto a longer single CD to create a true masterpiece of an album instead of muddying it down this way.

Overall, we give Verbal Penetration a 4 out of 5 afros. While the comments above make it seem like it would be lower rating, that’s simply not the case. Verbal Penetration is way too good to ignore and a must have for any fans of Jesse Johnson.  His guitar prowess is evident on the album and the musicality of the song collection makes it a great funk album to have.  But 14 years between albums can definitely hurt a fan base. Either way, Verbal Penetration is definitely Funkatopia approved.