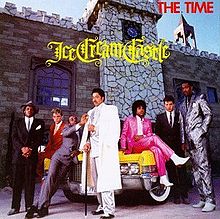 This album is the immaculate album of The Time. True Time fans will tell you that while this was the breakthrough album for the band, it was not their best. Ice Cream Castle broke through via the film Purple Rain where a good bit of the songs found a home in the movie, but strangely not on the soundtrack.  It was a bizarre marketing tactic that just seemed off kilter. Regardless, it worked, but for some funksters that have followed the band since the early days, the album was dreadfully short on songs only offering a paltry 6 songs not even totaling 40 minutes in length.

But the songs showcased the bands capabilities and they all were at rare form. The inevitable funkiness of The Bird and Jungle Love quickly became dance hall favorites and songs that would be forever engraved on The Time‘s playlist even to this day more than 25 years later. My Drawers was another amazing song that was just as funky as the other aforementioned hits, but it never saw much radio play.

The remaining 3 songs were pretty much solely designed to further the bands image as a jokingly egotistical, womanizing, well-dressed gang of funky talented musicians. All of which were pretty much penned by Jesse Johnson with exception to the title track which was penned by Prince and Morris Day.

All in all, Ice Cream Castle is a funk classic that helped the world stand up and recognize that The Time was truly a force to be reckoned with. It is a must have for any funk fanatic that is filling in their collection of missing classics. While it’s short on time and short on songs, it’s undeniably a classic funk album and an imperative addition to all funk collections. But because it fell so short on expectations compared to other Time albums, we only give it 4.5 out of 5 afros.

If it had a couple more songs to further showcase the bands talent, it would have hit the 5 out of 5, but Paisley Park did the band a huge disservice by cutting them short. Shame on you!  Compared to the other Time albums, this one was a good funk fix, but we felt cheated.  Leave them wanting more just doesn’t cut it, but when you can pick this album up for under $5, you better own it or be ridiculed.