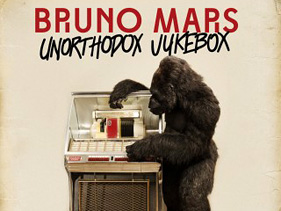 Bruno Mars career goes back many, many years all the way into his childhood as a kid performer doing Elvis impersonations in Hawaii for big tourist audiences. After high school, he headed to Los Angeles to start his musical endeavors which proved to be a rocky road. He landed a record deal with Motown, who then dropped him. Refusing to go back to Hawaii as a perceived failure, he went back at it and landed another deal with Atlantic in 2009 which struck gold with him and continues to do so with multiple chart toppers. Not to mention a string of production hits such as B.O.B.‘s Nothing On You, Billionaire with Travie McCoy among others.

Bruno Mars’ new album Unorthodox Jukebox is packed full of potential hits. The unusual opener Young Girls builds the listener into the feel for album’s upcoming out of the box classics. Bruno Mars states, “We took some master chefs into the kitchen with no master plan,” says Bruno Mars. “It was either going to be a disaster, or we were going to come out with something incredible. It turned into this soulful, experimental, electronic, hard-to-explain thing,..That’s the reason behind the album title.”

The second song on the album, Locked Out Of Heaven has already found a place on the charts and rightfully so with a mix of funky riffs, ambient bridges, and Jackson-esque ‘Ungh’s.

Romantic lingo and making girls swoon is what Bruno Mars does best and even though he states that he wouldn’t do any more ballads, he does bring out some horny, sex drenched tunes like Gorilla (“You and me baby, making love like gorillas” along with “give it to me mother f***er” – which is edited by the way). The closest song to a ballad on this album is a piano based song called When I Was Your Man which is a heartfelt song of lament for an ex-girlfriend that features lyrics that every woman wants to hear a man say after a relationship has ended badly (“all the things I should have done, when I was your man“). 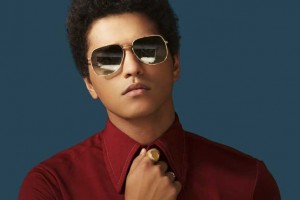 The next hit of of this album will be Treasure which features disco thumping bass, NKOTB style background vocals, and even added early Prince sounding synthesizer riffs. This song has top 40 written all over it, so expect to hear it a million times on the airwaves in the coming months. You’ve been warned.

The rest of the album is built out with the various musical whims of Bruno Mars including the reggae Caribbean tune Show Me, the power pop song Natalie, the club thumper Money Make Her Smile, and the Motown sounding mid-tempo groove of If I Knew.

Needless to say, this album is an amazing collective of brave risks that all pay off in a symbiotic orgasm of pop and funk. Our only complaint is the shortness of the album at only 10 tracks, but it’s a great 10 tracks and we give it a 4 out of 5 afros.