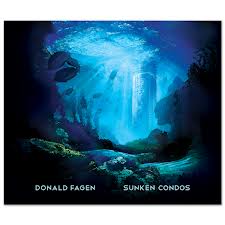 For those of us up in years, Steely Dan has graced our past days with amazing songs that have owned the radio for decades. Peg, Do It Again, Aja, Deacon Blues, Rikki Don’t Lose That Number, Reelin’ In The Years, Dirty Work, Bodhisattva, Black Friday, Josie, and the lists go on forever. And even among those multitude of hits, the two founding members, Donald Fagen and Walter Becker continued to write solo albums in between their Steely Dan sessions.

Donald Fagen‘s solo albums have also created their own collection of hits such as IGY – What A Wonderful World and New Frontier from The NightFly and Tomorrow’s Girls from Kamakiriad.  His newest album Sunken Condos could easily be positioned to recreate that hit-making machine if only the music world was designed for it anymore. His first three albums compiled what he refers to as “The Nightfly Trilogy” and include his first solo work The NightFly, Kamakiriad and Morph The Cat.

Fagen was relieved that the trilogy was now completed. “I’m glad to be done with it, too. It got to be a little oppressive, psychologically speaking,” he says in a Spinner interview. “It imposed certain strictures on what I could write about, what I could do. I felt that I had to do that because I felt I was compelled to finish that cycle. This kind of freed me up to write about different things, although in a way, writing without Walter Becker, I tend to write about my own journey anyway.”

Sunken Condos is the first album outside of the trilogy and a hint of what we can expect from him moving forward as he has insisted that any future albums have to be funky. And that’s completely fine with us. Sunken Condos is a 9 song collection of those amazingly jazzy funky songs with that laid back Steely Dan feel that only Donald Fagen can conjure. The recipe that has built many platinum albums is in full effect here and Funkatopians who fell in love with Steely Dan will find the exact same formula to fall in love with all over again.

Among the funkiest songs you’ll find the opening track Slinky Thing, Good Stuff and the only remake on the album, Isaac Hayes’, Out Of The Ghetto. Although Fagen’s ghetto is a tad different re-visioning than Mr. Hayes intended. 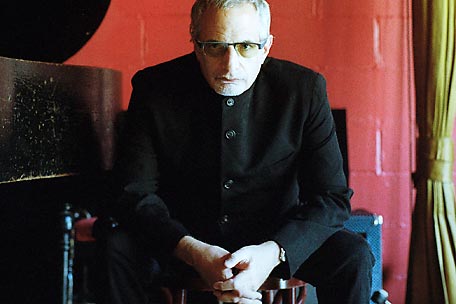 “I was interested in the word ‘ghetto,’ because it had been used so long to connect with the inner city, and I guess I wanted to recapture it for the Jews,” Fagen says. “I thought it would be funny, be humorous, although it’s kind of ambiguous until the later part of the record, because you don’t really get the kind of klezmer aspect of it until late in the record. It’s supposed to dawn on you as the track goes on that this isn’t about the Bronx.”

These funky songs stand alone as great slap bass funk grooves, but still maintaining that head bobbing shoulder shift beats that stick in your head hours after you’ve heard them. When the songs aren’t slapped with blatant funky grooves, they are glazed with nice bouncing bump and sways like the poppy songs Memorabilia and The New Breed, which showcase Fagen’s obsession with off-kilter chord shifts that magically seduce your eardrums with buzzy goodness.

The slouched puff and swing chills are there also like Weather In My Head, Miss Marlene, and the closing track Planet D’rhonda which features some amazing guitar work and his standard fare of intricate chord progressions. But now his sense of musical freedom is more palpable than it’s ever been and we’re very interested to see how this expands into this new universe he’s creating.

In short, we give Sunken Condos a 4 out of 5 afros. Older funkatopians born in the 60’s and 70’s will feel immediately at home with this newest offering and we’re still trying to find something better to put into the CD player. The only thing that makes us angry is that current radio isn’t designed to appreciate any music encapsulated in this genre since radio nowadays is focused on temporary garbage with no focus on finding the new generation of classic songs.   And that’s a shame. For now, file Sunken Condos under “Badass”.