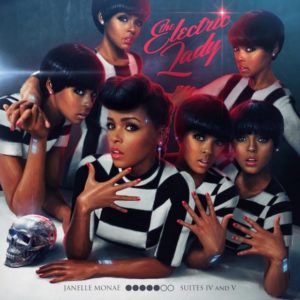 What do people truly want in music? A chance to get lost in a new world? Something totally different and thrilling? A story? A message? Look no further than Janelle Monáe‘s new album The Electric Lady that accomplishes all of these things.

From the James Bond-ish opening Suite IV Electric Overture that bleeds into the Prince accompanied Givin Em What They Love to the closing 80’s pop synth and pads of What An Experience, Janelle Monáe delivers on every level musically, artistically, and thematically.

Guest artists abound on the album including the aforementioned Prince (Giving Em What They Want), Erykah Badu (Q.U.E.E.N.), Miguel (Primetime), Solange (Electric Lady), Esperanza Spalding (Dorothy Dandridge Eyes) and for those that snag the Target version, Big Boi and Ceelo Green on the Electric Lady remix.

It’s virtually impossible to pick stand-outs on this double album since every song could stand on its own minus the segue pieces that feature DJ Crash Crash serving as the host to the radio show that essentially keeps the theme together and cohesive throughout The Electric Lady. 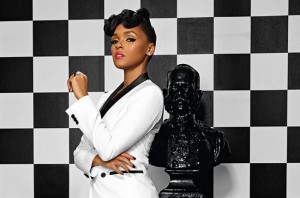 The album’s story revolves around a world that has an ongoing discrimination between androids and humans. The songs support the story on an emotional level while DJ Crash Crash (also an android) keeps the story flowing by announcing happenings around town as well as taking calls from humans and androids who express their emotions and feelings about androids including everything from frustration (“I’m sick and tired of all these folks messing with us droids!”), sex (“Robot love is queer“), and the unavoidable ignorant call-ins.  The serves as a great purpose by giving insight as to the state of community in this new dystopia.

Janelle Monáe takes on the persona of Cyndi Mayweather who is a droid on the run being sought out by bounty hunters but that is protected and admired by fellow androids who refer to her as “Our Favorite Fugitive“.

The double album is filled up with a bunch of potential radio crashers including the boppy Dance Apocalyptic, the 80’s funkafied Q.U.E.E.N. where she’s joined by Erykah Badu (think Madame X – see official video below), and the sexy and thick Primetime with Miguel. Other standouts are the very James Bond-like Look Into My Eyes with simply beautiful and stunning vocal work from Janelle that closes out the first disk, but immediately allows you to understand why she is where she is musically. 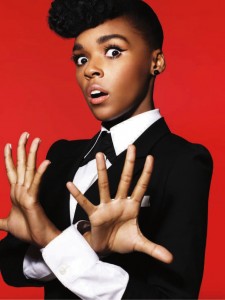 Opening the 2nd disk is Suite V Electric Overture which carries the vibe of Look Into My Eyes before swinging into a Caribbean flow and then back into the orchestral movements that fill the album off and on and front to back in some capacity. Beginning from the song It’s Code, the second disk begins with a more Jackson 5 pop R&B feel and even Janelle’s vocals are so tightly wound and pushed out front similar to how Michael Jackson‘s was back in the ABC day, that it almost seems as if that’s exactly what they were trying to re-enact. The following song Ghetto Woman hearkens back to the same era, but a little more current with a Stevie Wonder Innervisions vibe.

The rest of the disk features some amazingly constructed songs like the intricate yet somehow familiar chord structures of Victory, the neo-soul slice of heaven Can’t Live Without Your Love, the Ohio Players slow jam guitar feel of Sally Ride, the absolutely incredible samba Sade-style Dorothy Dandridge Eyes that could stand as part two of Prince‘s Ballad of Dorothy Parker (a Dorothy coincidence?) and then to the closing synth pop of What An Experience that bounces into a reggae feel during its final bars.

This album is a carefully constructed masterpiece that you can keep in rotation for many years to come. It borrows some pieces of musical Americana, blends them and then pours them into a smoothie with careful precision. There is nothing like this currently on the market and hopefully we’ll hear the payoff on the radio sometime in the very near future.

Go and get it now. Snag a physical copy from Target and get some bonus tracks. Either way, get it. It’s that good.