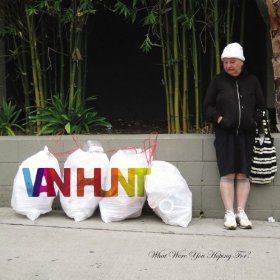 “I want this album to be disruptive”, was the statement from Van Hunt regarding his pending album release What Were You Hoping For? that has now finally hit the shelves and in reality, that’s exactly what it was. Disruptive.

Two years ago, Van Hunt was signed to the world renowned Blue Note Records, but they simply did not share his vision for the risks that he chose to take musically and shelved his Popular Machine album (the link is to an EP of the album), which many consider his groundbreaking work.  WWYHF was musically next in line after Popular Machine, but for fans of Van Hunt that didn’t get to hear the Popular Machine album, this will be drastically removed from his last official major label release of On The Jungle Floor that saw him experiencing some of his most commercial success.  And it’s way removed from his very successful solo album Van Hunt that showcased two hits for him with Down Here In Hell (With You) and the R&B hit Dust that earned him a Grammy nod in 2005.

Van probably believed that he had already catered to the commercial audience as the “man behind the curtain” writing songs for Dionne Ferris (Hopeless), touring with everyone from Mary J. Blige to The Roots, and even a collaboration with John Legend and Joss Stone on the remake of Sly Stone’s Family Affair which earned him a Grammy win in 2006.

But instead of succumbing to the requests of a major label and going the way that most commercial artists strive for, he decided to follow his desire to create something that he had never heard before. To take all of the influences that have embedded themselves into his psyche and mash it together into an inexplicable genre that borders on psychedelia topped off with tons of distortion, effects, excerpts, funk, punk and rock.  But the results may be too far gone for people to wrap their heads around.

Commercially, this album will most likely never see the light of day. Not for the limited distribution of the album via Red Distribution through the Godless Hotspot label, but simply because it’s almost impossible to categorize it.  Even songs that have some semblance of order, seem to go off on various tangents that don’t maintain any continuity. Very simply put, Van was only concerned with pleasing himself and for a musician that’s as it should be.  You can only hope that people share your vision, but it will be far fetched to find someone in tune with the maddening beauty that is What were You Hoping For?.  He even addresses this lyrically by saying, “Give them what they want, and they’ll only want more.”  The problem here being that people might not buy it if it’s not what they want. We’re wondering if he even cares. 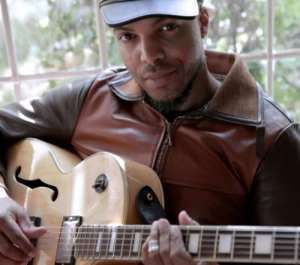 WWYHF is a beautiful mess. The opening track of North Hollywood seems as if it’s found an off-kilter beat to settle into and then jettisons off unexpectedly into a hard John Bonham style drum rock bash. The continuity of every song that follows is only threaded together with surprises as if every possible idea that floated in his head was placed onto the album.  The ballad of Falls (Violet) can’t even stay calm long enough before breaking off into a poppy tune. The following song Moving Targets stays relaxed long enough to qualify as the albums one true ballad, but even it feels like the instrumentation wants to break free to sprint towards the finish line.   A Time Machine Is My New Girlfriend is reminiscent of where Van left off with his punk-pop sensibilities that most got a sense of on the On The Jungle Floor album with the song At The End of a Slow Dance that seemed completely out of place where some even wondered if it was the same artist.

But what’s more curious here is that Van has decided to make a lot more controversial statements than he has in the past. Lyrics such as “I asked for a taste of Jesus’ Blood because it tastes just like grape juice.” from Watching You Go Crazy Is Driving Me Insane and even racial undertones such as “It’s the end of ‘white flight’. Can’t afford to live around the people you like.” on the title track What Were You Hoping For? that he says is about the plight of society that complains about where they are while not even considering that it’s a direct result of the decisions we’ve made as a society. What did you expect the outcome to be? What were you hoping for?

All in all, newcomers to Van Hunt will have no idea what to make of this offering, but then again neither do die-hard Van Hunt fans. Some who followed his transition during and after the Blue Note fiasco including buying into his independent release of Use In Case of Emergency that showcased mostly outtakes, saw this coming. At least those fans knew that this album was going to be unfettered madness directly reflective of his musical genius.  In the process however, he abandoned the audience that rewarded him for his R&B masterpieces and then alienated the commercial path that brought him Grammy nominations and awards.  All of which he exchanged for his musical freedom to do what he wanted to.

While there’s freedom in his decision, it shouldn’t be surprising to him when this album struggles to find an audience. There’s a lot of truth to his statement that he was attempting to record an album that he had never heard before, but he should also expect the consequences of that.  From a funk perspective, we can only give it 3 out of 5 stars for the very fact that it’s filled with brilliant songs that are way ahead of their time. Outside of the funk realm, it may very well take 4 out of 5 stars even though it would leave some from the outside scratching their heads.

If you’re a hardcore Van Hunt fan, your frustration level is about to peak. We all want to see him succeed and be noticed by the general public for his musical prowess, but he’s not willing to make any concessions. There is something amazing in that very fact that he isn’t willing to compromise his integrity about his musical direction, wants and desires. The problem is that he makes no apologies and it’s commercial suicide.  Guess we’re all along for the ride…because we ain’t getting out of the car and after you take a listen, you won’t want to get out either. A gorgeous risky journey.