August 11, 2022 marks the 40th anniversary of the iconic self-titled album Vanity 6. While a full-blown album chat was done years ago for the Vanity 6 album, you can’t help but acknowledge the impact that this iconic album has brought upon us and with 4 decades now under its garter belt, a brief revisit seems warranted. 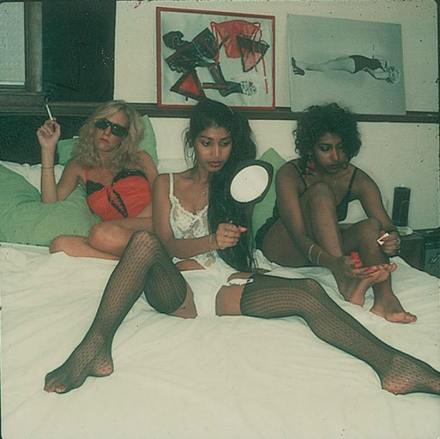 When Vanity 6‘s debut album dropped, it was in 1982 and the songs ruling the radio were Olivia Newton John‘s Physical (Rest In Peace), Eye of the Tiger by Survivor, and Joan Jett‘s I Love Rock and Roll. On the Black charts, Marvin Gaye‘s Sexual Healing, Truly by Lionel Richie, and Stevie Wonder‘s That Girl. About the closest style in that year to what Prince unleashed with the Vanity 6 album was the Dazz Band‘s Let It Whip.

No one knew what to make of this trio of three naughty-mouthed ladies announcing to the world that they were nasty girls that needed “7 inches or more” and that they would do it anywhere. Even on a limousine floor. Then to add to the mix that the visual component was even more shocking. Beautiful women dressed in lingerie with each designed to appeal to individual tastes, but all seductive in their own filthy way.

The band was originally a project created by Prince called The Hookers and featured Prince‘s assistant Jamie Shoop, his girlfriend at the time Susan Moonsie, and her sister Loreen Moonsie. None of which had any previous vocal training. Prince was solely focused on the look and would get to the sound however he could.

The project would be put on hiatus as Prince began his Controversy tour, which is when Loreen Moonsie and Jamie Shoop informed Prince that they no longer wanted to be a part of the project. Without missing a beat, Prince moved forward to fill their spots with alternate singers, while still maintaining the overall vision of an all-girl band with massive sex appeal.

By 1982, Prince had chosen Brenda Bennett and Deniese Matthews (aka Vanity) whom he met at the American Music Awards when she was dating Rick James. Vanity agreed to be a part of the project but refused to perform in a band named The Hookers, and reluctantly he conceded and renamed the band Vanity 6.

Only 3 songs from the original Hookers project made it to the newly christened Vanity 6; Wet Dream, Make Up, and Drive Me Wild. The rest were created specifically for Vanity 6. Four of the 8 songs were released as singles and the remaining 4 tracks were the B-sides to those singles, meaning that all of the songs were released on 45’s as either a single or a B-side.

All of the songs were written by Prince with some exceptions. Dez Dickerson wrote He’s So Dull, Terry Lewis co-wrote If A Girl Answers (Don’t Hang Up), and Jesse Johnson co-wrote the music for Bite the Beat along with Brenda Bennett writing lyrics for the song.

Overall, the album performed well on the Black charts reaching #6, but due to the explicit lyrics only reached position 45 on the U.S. Billboard charts. However, from a club perspective, you couldn’t escape a dance floor without hearing Nasty Girl thump through the speakers.

Vanity 6 started a mad craze nationwide with women dressing more scantily and with Purple Rain and Madonna arriving on the scene less than a couple of years later, debauchery had a stronghold and a new line had been drawn in the sand.

Speaking of Purple Rain, the 2nd album for Vanity 6 was due to arrive as part of the Purple Rain package with Vanity playing the lead role in the movie. However, once Vanity read the script, she declined the role, indicating that the movie had simply gone too far with the misogyny and violence against women. For those not in the know, the original script had to be toned down since it was much darker and even had scenes of rape.

As history would have it, Prince replaced Vanity with Apollonia Kotero and the band ultimately became Apollonia 6, which would begin an entirely new version of the band and feature just as much raunchy sex shooting.

Vanity 6 was groundbreaking in many ways. Not only as an output for Prince‘s alter ego, but also for pushing the boundaries of women in music as they unleashed their sexuality through the music. A trend that no one complained about.

Sadly Vanity passed away at the age of 57 on February 15, 2016. Just two months before Prince himself passed away at the same age of 57. But not before he was able to leave his mark across the music world through hundreds (if not thousands) of songs and many bands. One of them that will always be remembered without a doubt, Vanity 6. Happy 40th.