The story goes that the Nashville Orchestra cancelled and refunded money for a orchestral series entitled The Music of Prince featuring Marshall Charloff because Paisley Park shut them down. That’s not the full truth. But the story gets worse as we find that Atlanta Symphony Orchestra decided to completely alter the show without the knowledge of the ticket holders and where the deception will stop, no one knows.

Windborne Productions is a company that is deeply rooted and respected in the orchestral world and they vetted Prince tribute artist Marshall Charloff who has actually worked with Prince and many Prince related artists for most of his performing career and is regarded (even by us) as one of the best (if not the best) in the industry playing in the Prince tribute band called The Purple Xperience. His mannerisms, guitar,  piano, and vocal work are simply fantastic and a beautiful homage to Prince. He even has proper costuming and has undoubtedly honed his craft.

That’s why Windborne handpicked him to do a tour entitled The Music Of Prince where Marshall would perform alongside of world class orchestras around the world with music charts handwritten by the best composers on the planet to insure that they bring justice to the musical genius of Prince and honor Paisley Park. The reviews of the performed shows were full of praise and the remaining shows on the books that took the event through the entire year of 2018, were mostly sold out.

Then a mystery organization (name still unknown even to those involved) also wanted to do some symphony shows to honor Prince and quickly realized that there were no orchestras available to do their versions, simply because all of the major groups had already signed on with Windborne for the The Music Of Prince shows. And why not? They were well established and respected orchestral tribute organization that had been around for almost 30 years and Marshall Charloff was the best Prince impressionist on the planet.  So they tried, unsuccessfully, to piece-meal together their own orchestras from independent musicians only to begin failing miserably in regards to ticket sales.

Instead of accepting the fact that they were late to the party, they approached the probate court currently in charge of overseeing Prince‘s music and requested they be given sole rights to orchestral performances of Prince’s music. Once their request was granted, they were able to demand that all of the performances on the books (including Atlanta) be canceled so that they could put together their own version. Without the masterful orchestra charts of the proven Windborne Productions. And even more disconcerting, without Marshall Charloff. 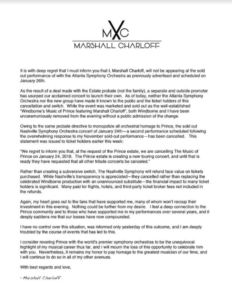 Forced to immediately stop all of the performances, all communications indicated that the shows were forced to be cancelled by Paisley Park‘s estate, but that wasn’t necessarily true. It was a directive from the probate court acting on behalf of Paisley Park, but the family itself had no involvement in the heavy handedness of this fiasco.  This was all legal tanglings created by attorneys. Paisley Park is already dealing with enough backlash as it is in regards to the music, so they certainly didn’t need this.

The Nashville Symphony Orchestra offered refunds to all of the ticket holders for the 2nd sold out show scheduled for Jan. 24th and simply bit the bullet as the cost of doing business.  Marshall Charloff also posted the announcement on his Facebook page which we acquired here for your viewing. But then we noticed that the ASO still hadn’t cancelled the sold out show even days after the announcement, which we found very curious.

We quickly found out that the ASO had deceptively changed the show, the band and singer from this new unknown group mere days before the Atlanta performance without informing the ticket holders that a change had been made. They quietly announced the change on their website that craftily changed the name to A Symphonic Tribute To The Music of Prince.

That was not how the tickets were sold. Many people were deceived into buying tickets based on Marshall Charloff and the respected compositions of Windborne Productions. So for the ASO to outright switch the show is just…wrong. They only just recently posted the new band lineup which features a vocalist who has not toured, looks nothing like Prince, does not have the mannerisms of Prince, plays no instruments, and simply destroys the vision of what the event was meant to be.  Additionally, Marshall spent the performance sharing stories about Prince‘s history and personal anecdotes that the newcomers simply can’t offer. And who is even writing the music charts for the orchestral arrangements with Windborne out of the picture?

The question will then remain as to what will become to the other shows on the books. Will the other orchestras also choose to lie and do a huge switch like the ASO did to their ticket holders or will they honorably cancel the event and refund the audience since it is not what was advertised? Either way, it’s more ridiculousness from the legal team overseeing Prince‘s legacy and another reason for Prince fans to be downright disgusted. Shame on the ASO for their dishonesty.

1 thought on “A Symphony of Deception”