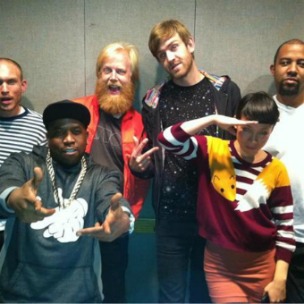 Little Dragon has received rave reviews from us as you’ve heard and read already. So we’re more than psyched to know that now they have been in the studio with Big Boi. It’s unknown what part the songs will play in future releases, but Big Boi released a video on TwitVid that talked about the excitement.

The video does little to shed too much detail, but Big Boi shares, “We are live at Stankonia Studios the place where all the funky things come from. We been in here for like 10 hours today. Rocking out, jamming. We cut two records…Daddy Fat Sax: Soul Crusader coming soon. And we just made history tonight man“.

And if you’re as excited about it as we are, Little Dragon singer Yukimi Nagano does little to calm you down stating, “Yeah, I’m so excited. I can’t wait for it to come out. I want it to be out now.”

The song will most likely appear on Big Boi‘s next album Daddy Fat Sax: Soul Crusader since Little Dragon is currently on tour supporting their new album Ritual Union. But we’ve learned never to let our guards down with Big Boi. We are in the ATL and are well aware of his antics.

Maybe he’ll give us a ring and let us behind the walls of Stankonia to see for ourselves just what we can expect so that we can hype it some more.