yep, more photos and more lyrics. we post ’em as they leak ’em. What can we say? We love The Roots.  This lyric leak is of the songs Lighthouse and I Remember from the new undun album. And here are the ones from earlier and the ones before that are here and here. That means there’s only two more left for them to share from the 10 track album.

However, Questlove “leaked” the album cover artwork for undun and may have leaked info about an extra track. The master CD in the pic shows 11 tracks and Eric Stats track by track coverage here only discusses 10. So we blew up the photo in Photoshop and compared Eric’s listing to what’s sitting on Questlove‘s laptop and the missing track appears to be the first track called Dun.  There is also a song called Baby Come Back that is the song Jump renamed (our guess) since it falls in the track listing that Eric shared. So Dun could be an intro of sorts, but the time shown appears to be 1:46 which is too long for a segue. Guess we’ll see. See for yourself; 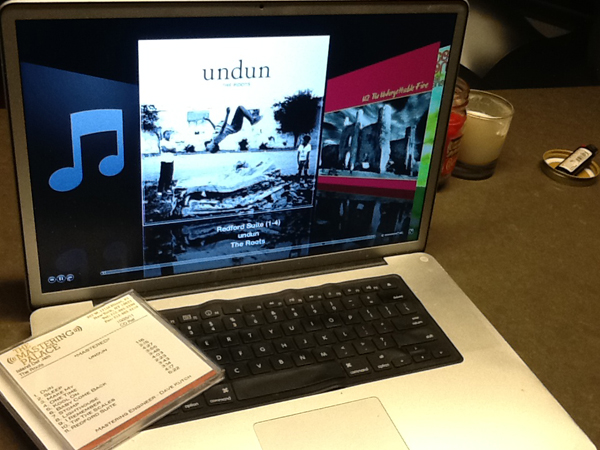 So the next post we’ll put all of them together with the photos. But for now, enjoy the spurts. 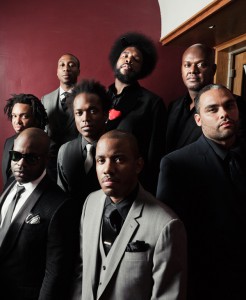 After the love is lost
Friendship dissolves
And even blood is lost
Where did it begin
The way we did each other wrong
Troubled water neither one of us could swim across
I stopped holding my breath
Now I am better off
There without a trace
And you in my head
All the halted motion of a rebel without a pause
What it do is done till you dead and gone
The grim reaper telling me to swim deeper
Where the people go to lo and behold the soul keeper
I’m not even breaking out in a sweat
Or cold fever but
I’m never paying up on my debt or tolls either
I’ll leave the memories here I won’t need them
If I stop thinking and lie, now that’s freedom
Your body’s part of the Maritime museum
Face down in the past is where I’m being

Verse 1 (Black Thought)
I drew a 2 of hearts from a deck of cards
A stock trick from my empty repertoire
Another hopeless story never read at all
I’m better off looking for the end
Where the credits are
It’s a pain living life against the grain
I’m looking back and y’all look the same
Troy, Mark, and little what’s his name
Memory is rerunning it all
It’s the flight of my fall and it’s right on the wall

I remember
Can you remember?
How it was
I do
Remember, do you? (2xs)

I’m a side of suicide
Heads or tails