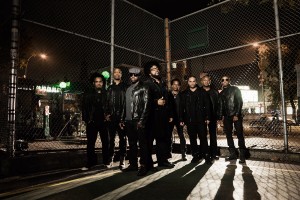 The Roots new album undun drops on December 6th and we’ve been anxious to get every tidbit of info we possibly can on this new album.  Somehow they’re finding the time to do it between their gig with Late Night with Jimmy Fallon and recording new Captain Morgan jingles and that’s perfectly fine with us. Lucky for us, Questlove is very cool about letting us have new details about the upcoming “masterpiece”.  We’ve already been given a taste of a new track from the album and now he shares a little more about their mindset and then lyrics for two of the songs (Make My and Sleep) from the new undun album.

“We want to get better at what we do. To get closer to realizing some isdeas we’ve had for some time. To simply embrace the process of putting one foot in front of the other.  I’m over 40 now and am no longer haunted by a young man’s hoop dreams but, I’m anything but resigned, just comfortable in my skin. We are fans of the work and attitude of today’s ‘winner-take all’ rappers: Em, Wayne, Kanye, Hov, Drake, Nikki Minaj (as well as the given hip hop bench of the moment). They do what they do really well. They’re charismatic, have this outsize pop sensibility and smell like vacation but, let’s face it… the Roots don’t ball that hard, you know where to find us (30 Rock M-F) and when niggas are in Paris we spend our down time in our rooms checking emails.”

?uestlove continues, “So no, shit ain’t cray…there will be no ‘President Bush don’t like Black people’ moment, or fabled rides in an old Rolls Royce Corniche. We understand sweat equity, the bottom line, the importance of being present and being on time. We’ve also been lucky, we’ve never had a high swag quotient and couldn’t write a pop song if our life depended on it but, we’ve been on a major for 18 years and have been able to develop our live performances to some degree of noteworthiness and found ourselves untethered from the machinations of Black popular culture. What this has afforded us (and more specifically myself) is the luxury of doing the different drummer thing. So we find the world to be full of possibility. The music we can create–the stories we can tell–it’s fairly wide open.”

And there you have it. And to further whet your whistle, here are lyrics for two of the songs off the new album (Make My and Sleep) and there will be more to follow.

“Make My”
You can actually listen to this song here.

I did it all for the money Lord
It’s what it seems
But in the world of night terrors-it’s
Hard to dream
They hollering cash rules everything
Let’s call it cream
Cause when it rises to the top you get…
The finer things
Ocean fronts, rolling blunts
With model chick and saying grace over lobster and steak
Like please forgive us for riding Benzes with camera plates
Too busy looking backwards for jackers to pump my brakes
For help sign to symbolize the live that hunger takes
Addicted to the green if I don’t ball I get the shakes
I’d give it all for a peace of mind for heaven sakes
My heart so heavy that the ropes that hold my casket break
Cause everything that wasn’t for me I had to chase
I had to take

Tryna control the fits of panic
Unwritten and unraveled
It’s the dead man’s pedantic
Whatever..
See it’s really just a matter of semantics
When everybody’s fresh out of collateral to damage and…
My splayin got me prayin like a mantis
I begin to vanish feel the pull of the blank canvas
I’m contemplating that special dedication
To whoever it concern…My letter of resignation
Fading back to black… my dark coronation
The heat of the day …the long robe of Muerte
That soul is in the atmosphere like airplay
If there’s a heaven I cant find the stairway

Verse 2 (Black Thought)
To catch a thief
Who stole the soul I prayed to keep
Insomniac
Bad dreams/Got me losing
Sleep
I’m dead tired
My mind playing tricks
Deceit
A face in the glass /Unable to admit defeat
All that I am all that I was is history
The past unraveled adding insult to this injury
I’m fighting the battle for the soul of the century
Destiny is everything that I pretend to be
Look, and what I did came back to me eventually
The music played on and…
Told me I was meant to be awake
It’s unresolved
Like everything I had at stake
Illegal activity controls
My black symphony
Orchestrated like it happened
Incidentally
Oh… there I go
From a man to memory
Damn
I wonder if my fam will remember me

Verse 3 (Aaron Livingston)
I’ve lost a lot of sleep to dreams
And I do not miss them yet
I wouldn’t wish them on the worst of enemies
Let them burn, go from here
Like when autumn leaves