Prince released his brand new album HITnRUN Phase One as an exclusive release on Jay Z‘s Tidal service. The move is shocking in itself, but he did announce that he wanted to support the service for a variety of reasons, but the most prominent of which was the undisclosed agreement he arranged with Tidal and the revenue sharing that better supports the artists.

And then the gates opened… 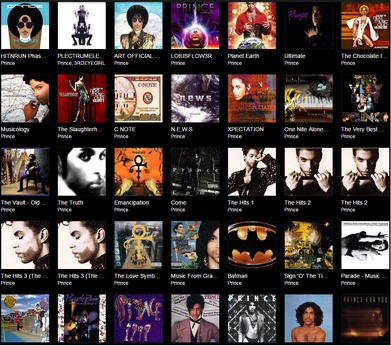 Popping up on the Tidal service over the weekend were a bunch of releases added to his discography list including The Chocolate Invasion, The Slaughterhouse, XPectation, N.E.WS., LotusFlower, C Note, One Nite Alone, The Truth, along with the singles we’ve been seeing including The War, Baltimore, Extraloveable and others.

All of this seems to be a wakeup call to any who are paying attention that when Prince puts his cards on your table, he’s apparently all in. Mysteriously missing are still some amazing albums we’re waiting to see such as Crystal Ball, Rainbow Children, Black Album, Dream Factory and others that people are still waiting anxiously to stream.  But for now, there are a bunch more to choose from and who’s complaining? Nobody.

If this latest wave of additions is any indication of things to come, we suggest you sign on sooner rather than later. And definitely take advantage of the 3 for 1 offer that Tidal just offered via email, but that you can also snag here.