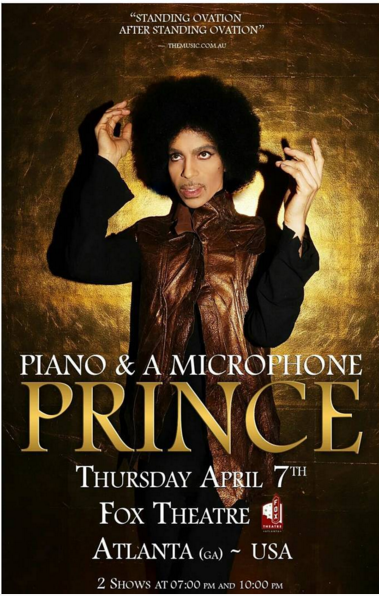 The last time that Prince performed in Atlanta was 10 years ago playing guitar as a backup musician for Tamar. As the headlining artist, the last time he came through was almost exactly 12 years for the Musicology tour on April 30, 2004.

Needless to say, Prince fans in Atlanta have been going crazy trying to plead for his funky majesty to come back. They watched as he made appearances all over the world including Australia, Canada, London, France, Belgium and many others and then even revisited some of those locations again. If it wasn’t for the horrendous terrorist attacks on France, they too would have experienced a second visit from his highness.

Of course, we at Funkatopia were at the helm of making a whole bunch of noise about Atlanta being left out for all of these years. Whether all of the incessant whining paid off or if it was finally planets aligning, Prince finally has agreed to step foot back in the Southeastern United States bringing his Prince, Piano and a Microphone tour for a two show stay at The Fox Theater in downtown Atlanta on April 7, 2016.

Reserved seating starts at $100 and upwards to $375. While they go on sale on March 30 at noon via the Fox Theater website, it’s sure to sell out extremely fast since who knows when he’ll grace us with his presence again.

Funkatopia founder Mr. Christopher is scheduled to be out of town in Florida the entire week and abruptly changed his plans to come back for the show. “There was no way I was going to miss him. I’ve waited over a decade to see him live again, which will be my 27th time counting concerts and afterparties. The wife is definitely not happy about cutting the vacation short, but she knows that I’m obsessive when it comes to all things Prince and wouldn’t even bother arguing about it. She knows it’s a pointless battle. ”

Everyone in attendance will get a copy of Prince‘s Hit N Run Phase Two CD after the concert adding to his brilliant strategy that adds to his CD sale count and surges him back onto the charts.  The massive song lists that he has been documented playing during the previous Toronto shows included 57 songs and and was just a taste of what Atlanta can expect for this momentous event.

All we can say to Prince is THANK YOU for finally coming back to the Peach State. The Atlanta concert world without you has truly been the pits.