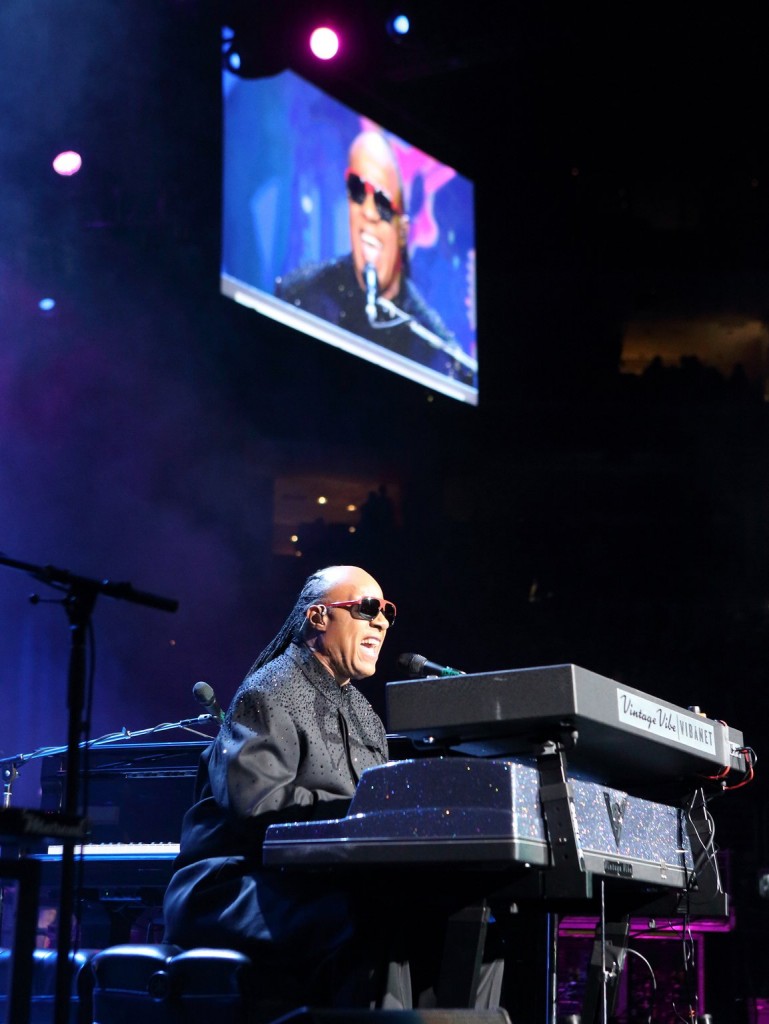 There’s not much doubt that Stevie Wonder is the immaculate superstar. You’ll most likely never find a review of one of his shows that would be negative due to his mass library of hits, but what could have been a sleepy show in Atlanta as Stevie Wonder made a stop in the ATL supporting his current tour performing Songs In The Key Of Life in its entirety, turned out to be masterful in every sense of the word.

Most would agree that Songs In The Key of Life is one of Stevie’s best albums ever and his only double album (sans greatest hits collections), but with a track list that kicks it wide open on the first album and with exception to 1 or 2 hits, goes into a compilation of lesser known songs on the 2nd half, the end result could have been anti-climactic.  Stevie came onto the stage at sharply 8:30 while the rest of the band including string orchestra and began with introductions and prefacing the show with commentary and introducing his sons who were on hand to watch the evening’s festivities.  Co-hosting the evening and providing background vocals for most of the night was the lovely India Arie which was an added bonus with even more surprises to come.

He then began to take on the album in its original track order, but it became evident a few songs in after the barn burners of Sir Duke and I Wish, that the normal listing wouldn’t serve as a good support and songs such as Saturn and If It’s Magic were migrated to the first half as if he himself were aware of the potential to lose the less hardcore fans.  But Atlanta’s sold out Phillips Arena was filled primarily with an audience that knew exactly what they would be getting as they danced and swayed to every song.  Along with more guest surprises like jazz guitarist legend Earl Klugh.

One of the background vocalists providing the backbone for Stevie the entire night was Keith John, son of the R&B legend Little Willie John that has toured with Stevie for many years now. During the first set, he was even given the opportunity to sing his father’s song Talk To Me after wow’ing the audience at his amazing vocal prowess that rivaled even Mr. Wonder himself and made it dreadfully evident that if Stevie was ever having a bad night, he only needed to lip synch and Keith could probably take over and no one would be none the wiser. And no, we’re not kidding.

The show was broken up with an intermission and started back with an explanation of Isn’t She Lovely including an introduction of his daughter for whom the song was written for (who also has toured with her father for many years). She herself was very much holding her own including ripping through the vicious and raucous Ordinary Pain.  They then stayed the course with exception to a couple of impromptu jam sessions including a piece of Michael Jackson‘s The Way You Make Me Feel. At near the completion of the albums tracks, the last special guest of the evening Janelle Monae who came out and sang for the remainder of the album as India Arie joined the background vocalists which then crescendos closing with As which became an onstage celebration.

And just when everyone thought the show was over, Stevie brought on his alter ego DJ Tick Tick Boom which then began to play even more of his hits including Part Time Lover, Happy Birthday, Higher Ground and others including a mass sing along closing the evening with Superstition.

The concert clocked in around 3 hours (even excluding the intermission) and ending near midnight. Stevie was in peak vocal performance and was simply majestic and full of energy. We simply must give Stevie Wonder’s Songs In The Key Of Life – The Performance tour in Atlanta a whopping 5 afros. If it comes through your town,you should run to the box office and go see what very well could be one of his final touring performances.