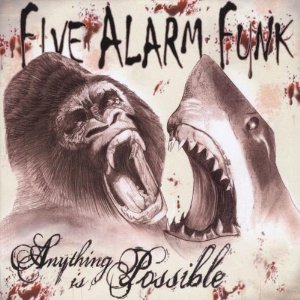 We get inundated with a lot of CD’s that people try to write off as funk, when at best, it’s R&B with a little bass. But there is no confusion when it comes to the 12 piece Canadian band known as Five Alarm Funk. The band is primarily instrumental with occasional flavoring from an over the top almost Muppet-like ranting of a Dr. Hook type frontman who doubles as the band’s drummer.

Their last album entitled Anything Is Possible hit our inbox a couple months ago, even though it’s been available to the public since July of 2010. Anything Is Possible is horn-fueled frenzy with quite a bit of Latin influence that weaves itself into pretty much every song on the album. The album opens with a children’s choir abruptly interrupted with a wailing “Anything is Possible” and then proceeds into a breakneck speed with a song called Zenith Escalator.

There are several songs that offer an Egyptian type of feel including Titan and Brother Egypt, but for the most part, the album is filled with tricky changes, funky minor chords, and the massive horn army blending together to create some of the funkiest riffs since Pass The Peas.

The only thing missing from the mix is the presence of keyboards, but with as much going on as Five Alarm Funk brings to the table, it’s hard to complain when you’re grooving and bobbing your head along track after track. There’s no mistaking that this is truly a funk filled album with elements of jazz, afro-pop, latin, and a sprinkle of New Orleans stabs and sway.  It’s unusual that these guys originate out of Vancouver of all places.

While we’d love to talk about each and every member of the band and the excellence they all bring to the table, that would be way more text than you would have patience to read since there are a dozen members. We’ll just say that these are some of the best funk-fused musicians on the planet. For anyone looking to enjoy a full-blown funk band with a massive horn section and high flowing energy, you need to look no further than Five Alarm Funk.

We give Five Alarm Funk’s album Anything Is Possible a whopping 5 out 5 afros. Get it here right now.