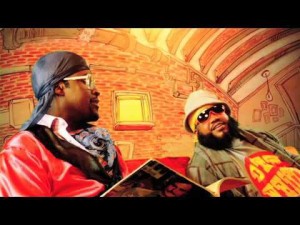 2/7/2012 Update: Yep. they released another video for this a mere week later. Check it out here: http://www.youtube.com/watch?v=OHmmYnw34hI. Now back to your regularly scheduled blog post…

De La Soul has released a second piece of their animated madness to the First Serve project which is their new alias. Plug 1 and Plug 2 from the band launched First Serve with the video for Mrs. Whitter. They also released the new single entitled Pushin’ Aside, Pushin’ Along.

Now the next piece of the puzzle has been launched with the launch of a new video called We Made It.

The first video, Mrs. Whitter, begins with Plug 1 & Plug 2 playing the roles of Deen Whitter and Jacob ‘Pop Life’ Barrow living in Deen’s mother’s home drinking, partying and making demo tapes in the hopes of eventually making it in the hip-hop world. The second video, We Made It, continues the story as our heroes get signed to a label called Goon Time Records. All of the pieces are below for your enjoyment.

The project is shaping up very nicely and has got the Funkatopia staff psyched up. The album is set to release in April of this year and they look to have their marketing boots on in full effect. This includes placing a mixtape on Soundcloud called The Goon Time Mixtape to add legitimacy to the storyline. They’ve also established a Tumblr and Twitter spot as well. It’s shaping up to be quite a marketing feat. We’re ready and we’re sure you are too.  Enjoy.

Song – Pushin’ Aside, Pushin’ Along