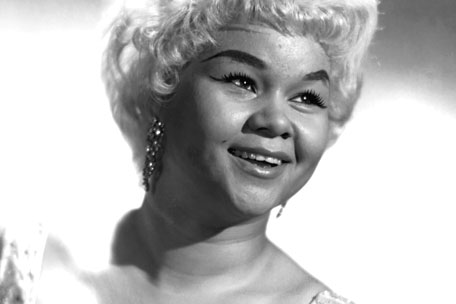 It’s been a sad week for music as Mr. Jimmy Castor passed away and now Mrs. Etta James at the tender young age of 73 in Riverside, California from complications from leukemia at Riverside Community Hospital. She had been undergoing treatment for a variety of conditions, but primarily leukemia and dementia.

Etta James biggest hit was the infamous At Last originally recorded by The Glenn Miller Orchestra, but she was renowned from all walks of music being inducted into both The Rock and Roll Hall of Fame and The Blues Hall of Fame.  Even in the 70’s and 80’s she was an opening act for The Rolling Stones.

Until the 70’s, she was signed to Chess Records which was the home of Muddy Waters, Chuck Berry, and many others where she encountered a string of hits. Not only the aforementioned At Last, but also Trust In Me and All I Could Do Was Cry.  Her career was very tumultuous due to heavy drug use that started out with heroin in the 60’s and then once she kicked that habit, moved to cocaine in the 70’s.

She recently saw a re-interest in her music due to Beyonce recreating her classic At Last and additionally sang it for President Obama at his inauguration in Washington. Beyonce even played the part of Etta James in the movie Cadillac Records and while Etta James praised Beyonce for it at the time, she later mentioned that she “couldn’t stand Beyonce“.  While she insisted that she was kidding, a huge part of it was jealousy over not being able to sing her own song for the first black President.

Her story is a hard road, but her impact on the music industry will be felt for many generations to come. Mrs. Etta James will sorely be missed. Our prayers to her friends and family.