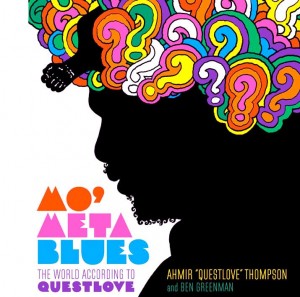 Mo’ Meta Blues: The World According to Questlove is Questlove‘s first true dive into what could be considered his mini-biography is an amazing adventure not only through some key moments in his life, but also a music lesson into the birth of the neo-soul movement and the artists that breathed life info the soul genre and even Questlove himself.

The book clocks in under 300 pages, but is filled with funny moments with Prince, run-in’s with Kanye West, the unfortunate Michelle Bachman incident, and plenty of things you may not have ever known about Ahmir Questlove Thompson. His unquenchable love for music led him into amazing opportunities such as being Music Director for Dave Chappelle’s The Chappelle Show, putting together the infamous Dave Chappelle Block Party, producing for Al Green, D’Angelo, and a laundry list of other accomplishments including their current gig with Jimmy Fallon‘s late night show. A gig that that’s about to put them into the illustrious position of having the most coveted spot on late night as Jimmy takes the reins from Jay Leno.

To fully grasp his musical journey, it’s filled with sections that wander into the artists and albums that most influenced his life. Everything from Prince and Stevie Wonder into other jaunts like Tribe Called Quest, Sly Stone and some select surprises. He discusses each album and not only why it had an impact on his life, but historical notes and individual notations about what made it special to him personally and what was unfolding in the music world at the time.

In making the experience of reading the book more pleasurable, I took it upon myself to cue up each album he discussed and listen through each album he mentioned as the book went on in order to really delve into his mindset and the end result was very rewarding for me personally. Being born in 1968, I grew up in the 70’s like Ahmir and experienced first hand the impact of music on my childhood during that tumultuous decade.

Spending a good chunk of my life in the projects, I had a lot of the same musical experiences, but many weren’t even close. I decided that I wanted to listen to his musical influences under his thought process and try to re-imagine what that sounded like in his sphere. His ability to capture his emotion at the time and dedicate so much energy to studying record labels is amazingly documented here and you learn very quickly that it has served him very well throughout the years. 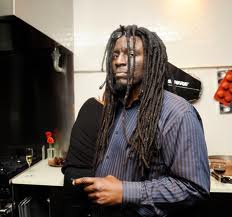 Another highlight of the book is the on-page banter that occurs between himself and band manager Richard Nichols. Rich’s input is integrated in the footnotes throughout the book and one thing you learn is that both Rich and Questlove love for people to make judgments based on their appearance. Afros and dreadlocks tend to lead people down certain paths of assumption. But once either of them opens their mouth, you learn very quickly that these books are the total opposite of their covers.

That stony looking cat with dreads who’s their manager is not just someone who happenstances into a great gig, but is a very articulate and multi-faceted individual from the Dennis Miller school of conversational magnitude. And of course, Ahmir is a walking music encyclopedia that surprisingly knows just as much about KISS as he does song origins from the hip hop realm.

All being said, Mo Meta Blues is a great music journey that is less about The Roots than you’d expect and more about Questlove‘s personal journey and the people he met and influenced along the way. This book is a must-read for hardcore Roots fans, but people expecting more behind the scenes drama from Jimmy Fallon need not apply although you do learn a lot about how they arrived at that envious opportunity and some pretty funny moments under the NBC umbrella. Everything you would expect to be covered is dished here, but probably not in as much detail as you might like.  Ahmir keeps some memories and details close to his chest, but the nosy voyeur in us wishes he would have revealed more on certain factoids and nuances.

About the only negative we found were some grammatical errors in the Kindle version which we’re not sure were evident in the printed version, so we couldn’t let the score be affected by those issues. We give this read a 4 out of 5 afros and it’s best if you can opt for a Kindle version that will give you easy travels back and forth between the book and the footnotes to capture Rich’s quirky input and dialogue. Go get it.