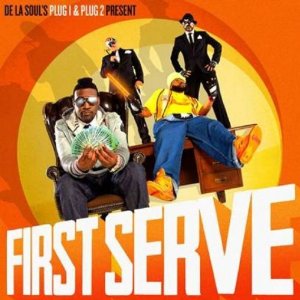 De La Soul’s Plug 1 and Plug 2 joined forces with French turntablists Chocolate and DJ Khalid to create a thematic album of some of the funkiest grooves this side of the pond in what could be considered their first album since 2004’s Grind Date (not including the “Nike” album).

True De La Soul fans will cry foul since the album does not have Plug 3, but the full De La Soul team is rumored to be joining forces with Prince Paul for their official eighth album tentatively entitled You’re Welcome. But we’re here to talk about First Serve which is out now!

Their ever present incomparable rhyming skills are still here and the rhymes mix a laid back old school feel sweetened with a storyline of the journey of two friends by the name of Deen Whitter and Jacob ‘Pop Life’ Barrow in a pursuit to land a record deal. 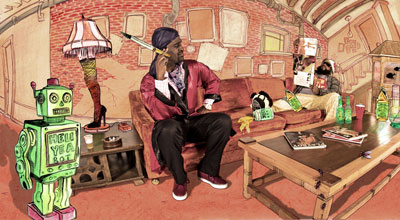 The story follows the duo from creating songs in a Mrs. Whitter’s basement all the way through to their final attainment of success and touches everything in between in the form of 16 very funky tracks. From the struggle for notoriety, getting signed with Goon Time Records, feuds to french hoes, reconciliation and more, it’s all here and woven into a narrated tapestry and capped on both ends with intro and ending credits.

It’s incredibly difficult to pick out any specific stand-out song since all of the tracks are radio-worthy (with some language editing of course), but they all have a solid feel. Chocolate and DJ Khalid have done an exceptional job spending time with the instrumentation to give them a “live and in person” sound. The bass riffs are thick, the drums are snappy, and the overall aura of the album is very East Coast, but many times dabbles in that West Coast top-down cruising summertime groove.

The flow of the songs do an exceptional job of not only leading the story along, but also maintaining the emotions of the storyline. Starting off with a light “no care in the world” of our two dreamers with Pushin’ Aside, Pushin’ Along which we debuted here along with the celebratory We Made It after the team gets signed with Goon Time Records.  Each song lends itself near flawlessly to the emotion of what’s going on.

Only two songs stray from that light funky sway and come off darker than the rest and that’s the “internal beef” section of the storyline that brings out the Chronic-like stabbing piano chords and gruffer lyricism. Those songs are Clash Symphony and Tennis (although the latter is post-beef) and they’re split down the middle with a very breezy cruising tune called Pop Life set in the backdrop of France. 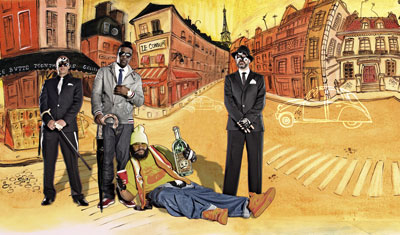 The storyline is narrated from front to back to maintain the continuity and is interwoven with a lot of humorous dialogue between the characters. There’s nothing too “eye rolling” here, but once you’ve absorbed the story, it may be a hard re-listen. The songs could easily stand on their own, but the story is so finely ingrained into the flow of the album, it may be difficult to break singles out of it.

Overall the album is filled with some great funk grooves, head bopping bass line and riffs and essentially the perfect soundtrack for a road trip. We’ve been excited to listen to the finished product ever since we received the first hint of its existence and we were not at all disappointed with the end product

We hope that the marketing really makes sure that De La Soul‘s involvement is out front a tad more forcefully than it has been, because this is a REALLY good effort and it would be a shame for it to get buried because of a lack of notoriety. Although we have a feeling that De La Soul fans will not let that happen anytime soon.

Get the word out. The boys from De La Soul have a new album out now called First Serve and it’s a great adventure. We give it 4 out of 5 afros!

Song – Pushin’ Aside, Pushin’ Along

Mixtape – The Goon Time Mixtape
This is NOT on the First Serve album. This was created to simply lend itself to the storyline.