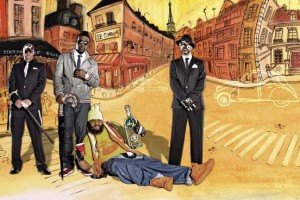 De La Soul ruled the airwaves back in the late 80’s and 90’s when they broke out with the song Me, Myself and I back in 1989 off of their debut album 3 Feet High and Rising. Regardless of whether you think they’ve dropped off of the grid, the truth is that they haven’t. They’ve consistently released albums every 2-4 years up until 2004’s The Grind Date.

Now, after a 7+ year hiatus and many production credits, there’s a concept album on the near horizon under the name First Serve.  The songs (and the rest of the album) will be dedicated to the sound of disco, funk and soul, which is immediately why it grabbed our attention.

Take a look at one of the concept videos released for Mrs. Whitter and then enjoy Pushin’ Aside, Pushin’ Along below. We can’t wait for this album to drop. Anyone else hyped about this?