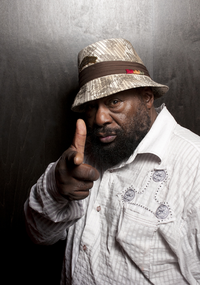 George Clinton is a busy man as of late. On top of partnering with ATLien Aleon Craft to create the free mixtape Mothership, The Decatur Connection, the funk prophet is also being honored by Berklee College of Music in Boston on February 16th with an honorary doctorate degree on February 16.  According to a press release issued by Berklee, the honor is being bestowed “in recognition for the funk icon’s enduring musical and cultural contributions.”

On top of receiving the degree, George Clinton will also be performing a concert to cover his many years in the funk industry from Parliament to Funkadelic (In Boston? Buy tickets here). In attendance at the concert will also be his long time horn section players Greg Thomas and Bennie Cowan.

In addition, he will also teach a four-day residency at the prestigious music college including visiting classes, interacting with students and even rehearsing with the Berklee P-Funk Ensemble.  This is the same ensemble that he made a surprise appearance as a teacher with last year along with the late Gary Shider for an MTV special.

Hopefully, the Berklee College of Music doesn’t have a curfew because George’s concerts are typically 3+ hours. In the words of Prince, “Bring your foot powder because it’s gonna be funky“.  In that area? Check out more details here.