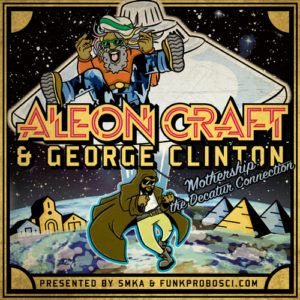 The mixtape phenomenon is among us and fans of R&B, hip-hop and rap are enjoying more legal free music than they could even listen to in their lifetimes. Artists such as Lil Wayne, Drake, and hundreds more create full length “mixtape” albums and release them for free on various mixtape websites such as datPiff and LiveMixtapes to promote a frenzy in between retail release albums.

The Godfather of funk, George Clinton now joins the mixtape family and was the #1 brother to start the sampling era as his music has arguably been lifted and re-purposed more than any other artist in history. Now he joins forces with Atlanta’s own ATLien Aleon Craft on a project called Mothership, The Decatur Connection.

The result is a funky raucous adventure and you can check it out right now for free. That includes listening to it, downloading it, burning it, and sharing it. Got to love mixtapes.