Guitarist Jesse Johnson, was found deceased in his Hollywood, California residence earlier yesterday. The apparent cause was not clear and no official statement, regarding the musician’s cause of death, has not, nor will be made, until the Los Angeles County coroner’s office has conducted a full autopsy and toxicology test have been completed. – CNN-Natalia R. Phiffer 10/27/2013

This obviously sent fans into an absolute craze until many hours later when Jesse Johnson quickly set the record straight; 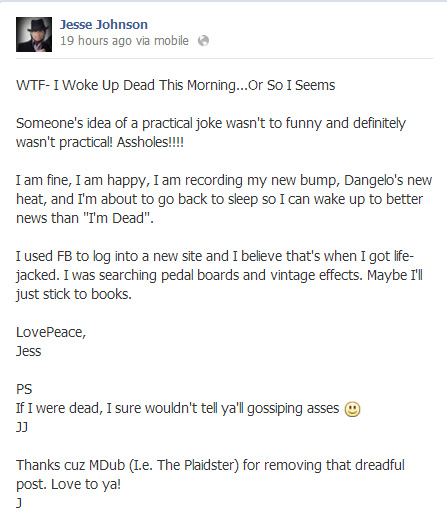 Luckily for all Morris Day and The Time aka The Original 7ven fans, he’s still alive and kicking. And although he’s not playing with them anymore, the good news is that Jesse will be on D’Angelo‘s new album, but the way the post was worded made it sound as if he’s recording a new album and also a new D’Angelo album. Could Jesse Johnson fans be getting a double dose coming soon? Oh man we hope so.

But the best news of all is that he not dead.