The Bear Creek Music Festival (BCMF) simply gets better every year. While it’s a bit of a drive for those in Atlanta, 4 hours is nothing compared to the amount of hours of pure entertainment you get in return. While other festivals like Bonnaroo and SXSW are littered front to back with varying musical genres, BCMF does a phenomenal job at keeping the funk flowing front to back. In previous years BCMF had its fair share of funk, but also kept a very organic acoustic presence. That appears to have taken a small back seat in order to accommodate the funk this go around.

This year, the event takes place in its standard location in Live Oak, FL starting on Wednesday November 13th for a benefit concert and continuing through Sunday November 17th. The larger known acts in the 2013 version of the festival features The Roots, Bootsy Collins, Galactic, Dumpstaphunk, Lettuce, Bernie Worrell, Karl Denson’s Tiny Universe, Dopapod, Robert Walter’s 20th Congress, The New Mastersounds, and the artist lineup goes on from there with funk acts galore.

While the preliminary sound is definitely New Orleans, Bear Creek Music Festival organizers did an amazing job at mixing things up this year by adding different flavors of funk from the DJ oriented, jam band sessions, and even hip hop in the form of our favorite rap act of all time, The Roots. Whether intentional or not, we see this year being very successful for them and we’ll be there to witness it.

To complete the funky experience, there are plenty of activities from Zach Deputy’s Disc Golf Tournament, costume contests (one even ordained by Bootsy Collins), many visual artists on display, and plenty of whatever you can dream up. The scale will be amazing (as it is every year), with plenty of opportunities to rub elbows with your favorites and meet tons of new funky friends over the duration of the event. 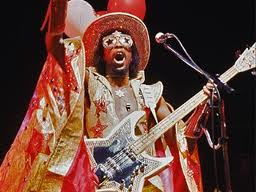 All we can say is, if you’re anywhere within a 8 hour driving radius and if you have the financial means to do so, it would be well worth your hard earned cash to experience this festival which will be unlike anything we’ve seen to date from the group, and easily the most cohesive lineup ever.

Many acts will be performing multiple times throughout the festival such as Lettuce, Galactic and Dumpstaphunk, and some bands are even participating in the Wednesday night benefit concert for Michael A.’s Children’s Fund including The New Mastersounds, The Revivalists, Toubab Krewe, Art Official and Freddy’s Finest.

While we won’t make the Wednesday and Thursday lineup, Funkatopia will be on hand Friday through Sunday to make sure that we document the event as best as possible and as much as they’ll allow and make sure that you experience it from afar.

Visit the Bear Creek Music Festival Website, Facebook page, Artist Lineup pages, and much more for all of the information including ticket pricing. This is a once in a lifetime experience that you do not want to miss. See you there.