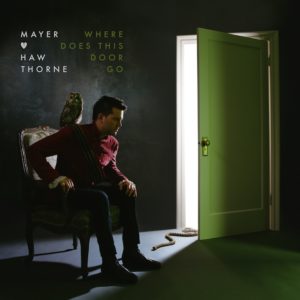 Mayer Hawthorne‘s previous albums sounded like they were ripped from Motown past and then wrapped in either sexy or tongue in cheek humor. But his new album Where Does This Door Go is a literal masterpiece and sign of incredible things to come.  While his previous albums like How Do You Do provided hints at the existence of these elements, this is the first time they have been so brilliantly constructed.

Mayer Hawthorne has stumbled onto a formula that has created a major double take because it is incredibly removed from his previous efforts. Part funk, part jazz fusion, but filled with pop sensibilities delivering plenty of radio friendly hits that will almost certainly change the game for his future. The genius is that Mayer Hawthorne offers the perfect convertible top-down bright sunshine tracks and blends them with the slow head bobbing five-toke grooves and ultimately creates a pallet full of many colors that can please even the hardest of curmudgeons.

The single Her Favorite Song hit the video airwaves and began a rolling all its own and serves as the perfect introduction as to what you can expect, but it then introduces you to many different levels of intricacies from the title track and its rolling harmonies reminiscent of XTC to the boppy silliness of Robot Love and the inevitable Top 40 of Allie Jones. There are even surprising moments such as The Only One that sounds like Dr. Dre married up with Maroon 5 and others like Wine Glass Woman that fell off the back of the Justin Timberlake truck. And you can definitely expect to hear the track Crime featuring Kendrick Lamar on your local radio station starting right about….now.

All in all, Where Does This Door Go? is a true musical gem that should be listened to by all fans of laid back pop funky fusion. It’s not too loud or raucous, and easily one of the best albums we’ve heard in 2013. Yeah, you best go get it.

1 thought on “Review: Mayer Hawthorne – Where Does This Door Go”