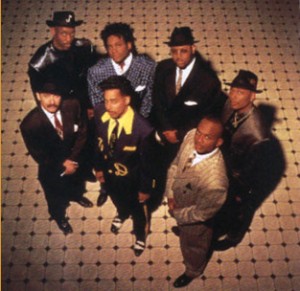 As many of you know, many Minneapolis era funk fans have been waiting on the edge of their seat since the announcement of a new album from Morris Day and The Time back at The 50th Grammy awards years ago.  And we whet your appetite when we went one on one with Jesse Johnson and he confirmed that the album is finished and awaiting release.

Well, we now have the details on the album release date including your opportunity to see them perform some of the material. The band has renamed themselves The Original 7ven and the new album entitled CONDENSATE will be released in less than one week on October 17th.  They have also quietly released an Amazon link here for pre-ordering.

They will make an appearance on The Tonight Show with Jay Leno the following week on October 27th.   That appearance will be supported by live concerts in Los Angeles at the Nokia Theater on October 19th, followed by interviews galore with Tom Joyner, CNN, Yahoo! Music, Vibe Magazine, and much more.

The Original 7ven brings together the entire group including Morris Day, Jesse Johnson, Jimmy Jam, Terry Lewis, Jerome Benton, Jellybean Johnson and Monte Moir.  After their 2 week promotional period in Los Angeles, they will head to Minneapolis for a homecoming show and then to New York for numerous appearances and concerts and a tour to further support the new material.

Additionally, Funkatopia has been approached by The Original 7ven staff and asked to help support the album with a contest just for you Funkatopians.  So stay tuned, don’t go anywhere and you’ll know when we know.

1 thought on “Morris Day & The Time Set To Release Album”