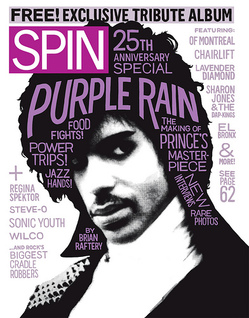 I found myself watching Purple Rain again a couple of years ago when it came on a movie channel and I remember thinking, this is just awful.  25+ years ago, this movie had literally changed my life and forever altered the music I would listen to.  Now, it’s just…awful. The music still stands the test of time, but the acting is just horrendous. It makes the actors on the Secret Life Of The American Teenager look like Oscar nominees. But never once had I even thought about what this movie must have looked like on paper and how hard of a sell it must have been.

Apparently, a reporter at the Houston Press decided that he would help you visualize what the actors had to work with during the taping of Purple Rain as he provides a draft of the script for you to gawk at.  This being another anniversary of the movie Purple Rain (26th or 27th. yes, that old.) .  The reporter got a hold of the early draft of the script of Purple Rain and left some bits in tact that many may find interesting.  Tidbits like Vanity 6 being the original love interest instead of Appolonia and Prince being known as just “Prince” and not “The Kid“.  Even Morris Day’s character was written with a tad more brute swagger as opposed to the campy icon he’s become.

When you watch scenes from the final cut of Purple Rain, such as the dialogue and non-verbal moments surrounding the music performances of some of the movies most iconic moments like the Purple Rain performance, Jungle Love dance sequences, etc.,  it just moves along effortlessly because it’s fed by the music. But when you see it on paper, it’s just downright ridiculous.  So without re-hashing what this reporter has already posted (along with actual music clips I might add), just see it for yourself;