Back about a decade ago in the late 90’s, Sly Stone granted the owner of a Sly Stone fanclub access to his home to have a personal visit where he would talk about his music, what he was doing, and even play some newer tracks he was working on.  That was the part that sparked immediate interest was knowing that Sly was indeed sitting on many tunes and it was just a matter of time before we’d get to hear new music from the man who brought funk to a stoned Woodstock crowd.

Fast forward 5 years later to an appearance at the Grammy’s and then people quickly become…not so interested. Then add more haphazard performances to the list of a Sly Stone either drug addled or simply too incoherent enough to perform cohesively and you have genuine public disinterest. 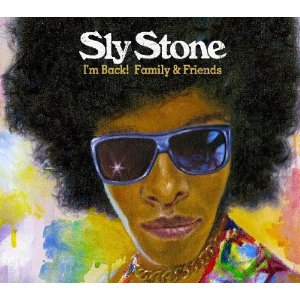 Now Sly Stone has finally revealed a date for the new album called I’m Back! Family and Friends and that date is August 16th, 2011.  The question on everyone’s mind is first and foremost is, what is on this album?  To our major disappointment, a good portion of the album is remakes of older tunes (over 90%).  The bigger question is why they’re even there. Did we not have enough of the greatest hits collections?  His collaboration with Jesse Johnson launched one of the bigger songs of his post 80’s career with Crazay and Jesse lives just down the street.  Could they not have joined forces to create at least an album’s worth of music over the expanse of what is now decades of fans waiting?

We’re not complaining (ok, we are complaining), but after waiting literally decades for new music from Sly Stone, we now find out that it’s essentially another Greatest Hits collection with some new song filler and that’s very disappointing.   The CD has 14 tracks and only 3 of which are new songs and one of which (His Eye Is On The Sparrow) looks to be yet another remake of the old gospel song that has already been covered by the likes of Lauryn Hill, Marvin Gaye and even Jessica Simpson.  The hit remakes do offer up guest spots from stars such as Jeff Beck, Bootsy Collins, Johnny Winter, Heart‘s Ann Wilson, Carmine Appice, and even Ray Manzarek of The Doors.  None of which appear on the newer songs.

You can view the CD here at Amazon and even pre-order if you’d like.  Hopefully the remakes will be  acceptable enough to warrant a purchase, but if there are truly only 2 new songs on here written by Sly Stone, this is going to be a very tough sell.  There is no denying Sly’s impact on the funk world and we have the utmost respect for his Royal Funkiness.  But to wait all of these years to hear only 2 new songs is a major disappointment…for now.  Maybe it’s amazing. Who knows…