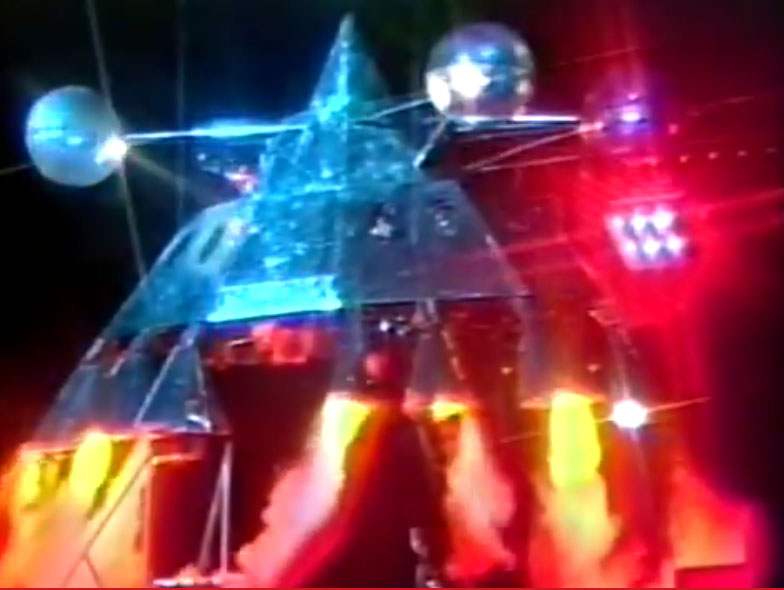 When you ask someone to name a person who is integral in funk music, you’re pretty much going to hear the name George Clinton or Parliament or Funkadelic or Parliament Funkadelic and rightfully so.

George Clinton was instrumental in creating the theatrical performances to wrap the listener into the music and bring the sights to the sounds. The artistic display that made it impossible to take your eyes away from what was being unveiled in front of you.

One of the highlights of his funktastical journey is without a doubt, the Mothership. A large aluminum spaceship that made a grand appearance during the Mothership Connection days from the home planet of Chocolate City. A crescendo of sparks, smoke and lights that would descend upon the stage in all of its glory and signal the arrival of the funky beings that come to take us away.

And lucky for us, the Smithsonian now has a section of their museum dedicated to African American culture and has decided to reconstruct the Mothership as a distinct anchor of what they refer to as Musical Crossroads. Without a doubt, its impact is not only in black culture, but its impact in musical culture is undeniable.

The original Mothership was sold back in 1983 for cash to make ends meet during their ongoing label squabbles and discrepancies. But the clone was recreated in the 90’s for certain Return of the Mothership shows which luckily found its way to Atlanta during its tenure.

Smithsonian has gone through painstaking detail to bring the clone back to its full beauty and has proven that they are “in it to win it” in regards to their sub-section dedicated to Musical Crossroads which is a permanent exhibit featuring the Mothership along with Funkatopia friends Mother’s Finest who spoke about their inclusion in our exclusive interview.

The Mothership has been being stored in George Clinton‘s studio in Tallahassee, FL and he wept when they removed it from his home to take the trip up to the Smithsonian display which is scheduled to open in 2016. While they were tears of joy, it was also a deeply emotional moment as they took away a part of his legacy. But there was solace in knowing that it would live on forever in history and treasured in a way that it truly deserves.

The good news is that it’s being reported by George that there will be yet another space vessel that will make an appearance at future Parliament Funkadelic shows, but this one will be a laser version that will take up a tad less of the stage and be a bit less wieldy to display. We will be front and center for that event.

For now, expect the Mothership Connection to connect with the imaginations for generations for years to come and if you were lucky enough to see it in action, you were very lucky indeed. We want to hear all about it.

Enjoy this quick video of them putting the Mothership back together for the Smithsonian appearance.