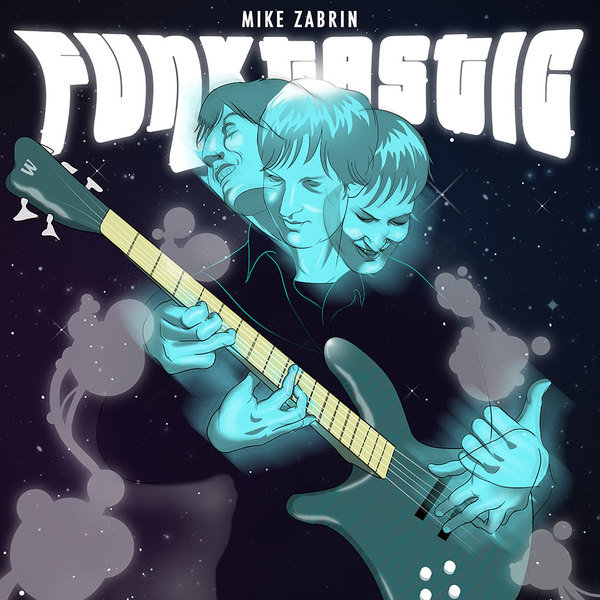 ometimes you’ll hit a dry spell where it seems like no one is putting out any new funk music and then there’s a sudden deluge of great material coming out from surprise locations. In this case, we had two amazing entries into the funk arena which we’ll simply just cross link once both reviews are finished because there’s so much to say about each one. Those entries are Analog Son and Mike Zabrin’s Funkatastic.

Mike Zabrin came to us via Funkatopia friend John Heintz from Big Ol’ Nasty Getdown fame. Mike Zabrin is all of 22 years old and is already considered a bass player phenom. And to have a debut album that comes out swinging like Funkatastic is a feat in itself, but Mike surrounded himself with some incredible musicians, producers and performers to create what we consider one of the best albums of the year.

The 11 track collection of songs is a perfectly blended journey of funk, jazz, acid jazz fusion, and pop elements. Imagine if you had the funk jazz flow of Jill Scott, pieces of the experimental foundation of Bilal, and funk elements of Parliament and threw them in a blender. The end result would be Mike Zabrin’s Funktastic.

The special guests throughout the album include Parliament Funkadelic’s Kendra Foster, the insanely soulful pipes of Sam Trump and Anthony Pavel, horns from Clifford Adams (Kool & The Gang and Sun Ra Arkestra), Michael Ray (Kool & The Gang), Greg Hollowell (Yo Mama’s Big Fat Booty Band), Norwood Fisher (Fishbone), and tons more. What could have been a mish mash of unrelated song structures ends up being soul artistry.

The overall feel of Funktastic lends itself to the aforementioned laid back acid jazz fusion in the overall spirit of early Jill Scott meets Erykah Badu. Songs that you will love but that may never find a home on Top 40 radio. However, one minimalist track entitled You Can Count On Me might actually have a shot at position on the Top 40 charts. Vocalist WOGZ adds her Lorde like approach scatting “Me, Me, I’m the one that you should be with. Me, Me, I’m the one that you should sleep with.” which creates a sweet radio hook if we ever heard one. With its spacey riff and ska flair, it very well might serve as gateway point to the deeper, more intricate song treasures that the CD has to offer. Radio might actually play this song for the riff alone, but if you get the listener in the door, there’s no way that they’ll escape without becoming a fan of everything this collection offers.

The release has so much to offer that it makes it incredibly difficult to pick specific favorites. From the two opening tracks of (You Are) Extraordinary and Life (see video below) to the amazingly beautifully structured The Other Side with Kendra Foster and even the quirky vocal delivery of Fishbone’s Norwood Fisher on Fact Fiction, Funkatstic delivers a wide variety of flavors that will soothe the savage funk beast for those that have acid jazz leanings.

It’s borderline travesty to not mention every musician and performer on the album, because there’s not a weak track in the bunch. But it’s a much better justice to be able to unpeel the layers of this album yourself and pick your favorite from the treasure chest this CD offers. And one of your future favorite songs is on this album.

And of course, we couldn’t finish the review without drawing attention to the name on the CD, Mike Zabrin. In a world where it seems like talented bass players are falling out of cracks like grains of sand, Mike Zabrin is truly a stand out. While his fast finger work is worthy of noting, his ability to fall into the groove for the sake of the song is admirable. That a young 22 year old bassist can hold his own in a roller coaster jazz romp is one of the most impressive angles you can focus on. While the CD could have been “All about Mike”, it appears that the intentional focus was on the quality of the music and strength of the overall product and the end result was well worth that attention to detail.

Without a doubt, this is one of two must have CD’s so far in 2014. You can snag Funktastic on Amazon or iTunes for currently only $9 and you’d be hard pressed to find many releases better this year. We have no choice but to give it 5 out of 5 afros.