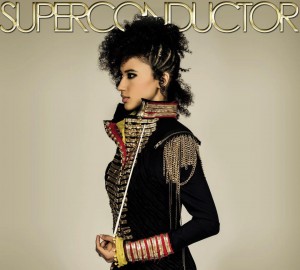 Andy Allo is an amazing musician with a very distinct sounding voice who had already gained some traction with her album Unfresh released in 2009 which was slowly putting her in the same class as Jill Jones and the neo-soul community relatively quickly considering how long it normally takes to break through to that crowd. She had created a unique sound that she called “Alter.Hip.Soul“. She had also gained some notoriety as a face on G4’s Attack of the Show along with campaigns for Kohl’s and others. Then along came Prince.

Prince and Andy Allo connected almost immediately and thus began a relationship that put her onboard as singer and guitarist for NPG and shortly afterwards released the newest album Superconductor just launched late 2012. The album was executive produced by Prince and he co-wrote 3 songs on the album including the title track Superconductor, The Calm and Long Gone. All 3 of which have his very distinctive fingerprints with the poppy chord jumps ala Diamonds and Pearls. Essentially, they sound just like a Prince song would.  Even though he’s only noted on those three songs, there are many touches and chord progressions throughout the entire album that are very distinctively Prince sounding such as the album’s first single People Pleaser.

People Pleaser is an incredibly funky track that should have no problem finding some filler time on the dance floors complete with touches from masterful musicians. The album is loaded with amazing talent including saxophonist Maceo Parker, New Orleans superstar Trombone Shorty, drummer John Blackwell, Morris Hayes on keys, Hornheadz, Ida Neilsen on bass guitar and even background vocals by Shelby J, Elisa Fiorillo, and Liv Warfield.

Of the most shockingly beautiful tracks on the album would include the tracks Long Gone, Nothing More, and Story of You & I. All of them hearken to a Sheryl Crow level of songwriting prowess with seductive melodies and tasty grooves. While slower songs normally take the longest time to grow after a first listen, these immediately attach themselves to your psyche with sweet flows and subtle changes.

Andy Allo noted that “the compositions for Superconductor incorporates a variety of layers and a whole lot of Funk.”, but with exception to a few songs (People Pleaser, Yellow Gold and When Stars Collide), the funk is very subtle, but there nonetheless. All being said, we’ll grace this album with a 4 out 5 afros because this time Prince has produced another nice groovy flowing piece of artistry and at the helm is a beautiful and very talented young lady which I’m sure we won’t see the last of any time soon.