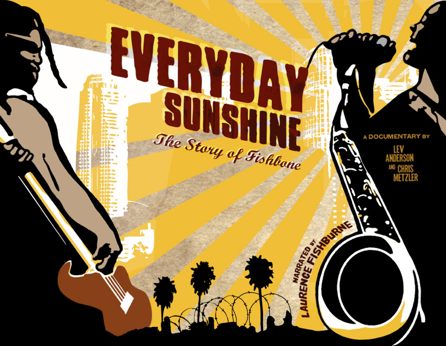 This is the first time that we’ve ever done a review of a movie, but for Atlanta folks, Fishbone has a rich history here even though they reign from California. To make it even more timely, Fishbone will be appearing here in Atlanta in a couple of days. My apologies for your regret should you read this late. For those not in the know, you owe it to yourself to get to this show come hell or high water because you won’t see anything like it ever again. Every show from Fishbone has elements of funk, ska, metal, rock, hip-hop and pop. With most bands, you have a general idea of what’s coming, but therein is where Fishbone’s strength lies.  A trait that many say are their true demise.

Every Sunshine: The Story of Fishbone is a movie documentary that reflects on the tumultuous past of the band and how the 3 remaining members have managed to hold it all together for so long (Angelo Moore, John Norwood Fisher, and Dirty Walt Kibby), even though the film doesn’t spend much time focusing on Walt primarily because he took a hiatus from the band from 2003 to 2010.  But the fact that he stuck it out for almost 25 years before even taking a break says volumes.

For those that were even remotely involved in the music scene back in the late 80’s, early 90’s, you knew who Fishbone were and made it a priority to see them in concert at least once to understand how a show should be presented. The energy was beyond anything anyone had ever seen. From insane balcony back flip stage dives to wacky thrashing onstage antics, Fishbone was always ahead of the curve. So it was tough for them to watch their friends like Red Hot Chili Peppers and other bands like Living Color go on to super stardom, while the creators of the sound wallowed in obscurity.

The movie does a great job of capturing the frustration of the band from the beginning of the project in South Central Los Angeles to the present day project. The use of fantastic animation sequences capture the early days and even dabbles in the historical background of segregated L.A. and how the band mates were bussed to white schools, which proved to be the spark of what would become Fishbone. 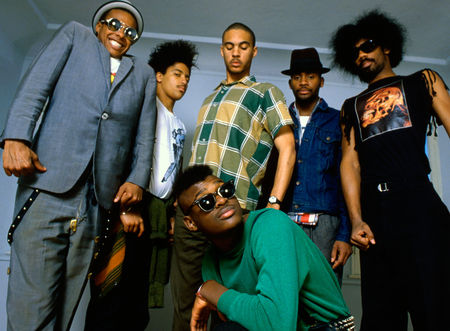 The film is filled with appearances from Flea from Red Hot Chili Peppers, George Clinton, Questlove, Ice-T, Gwen Stefani from No Doubt and many more who were truly influenced and moved by this amazing band. It’s also narrated by Laurence Fishburne and impeccably animated by some incredibly talented artists.

The documentary does exactly what it’s supposed to do which is to create a historical overview of the band and increase your interest to see them even more. The stark contrasts of their meteoric rise to fame in the 80’s to the end result of playing to audiences of a few hundred can be tough to watch. But at the same time it’s truly admirable to see a band that could have called it quits years ago and is still staying true to their craft.

The film shows some absurdly strange occurrences like Chris Dowd’s almost cult-like meltdown to Kendall Jone’s simply walking away. Both of which lend their insight to the film which really rounds out the documentary and makes it all-encompassing.

My own experiences with Fishbone began back in the 80’s when I was singing in a band called New Reality playing very similar sounding music sans a horn section. We emulated the sound of Prince, but still maintained the energy of bands of the time like Fishbone, Follow For Now and 24-7 Spyz.  The latter two bands being ones that also latched onto Fishbone’s formula. I’ve personally seen Fishbone a few times back in their hey-day. During their tour to support Reality of My Surroundings, I was cash-strapped and couldn’t go. So I took the bus into downtown Atlanta just to sit at the backstage door of the Roxy and listen to the concert. It was one of the most amazing concerts I had ever heard.  I also attended the show when Angelo went through his Dr. Madvibe phase overplaying the theremin during an entire concert at Midtown Music festival in Atlanta during the Chim Chim’s Bad Ass Revenge stage of their career.

Fast forward to present day and the band is still playing venues, still frustrated by their lack of fame and rightfully so.  But this may actually be the perfect moment for them if they could just get marketed correctly.  The movie may help that effort and their new EP Crazy Glue that was just released late last year may actually find some legs if it can get the push it needs by satellite radio and strong online marketing efforts. But if there is anything that can be said about Fishbone, it’s that they are in it until death do us part.

The movie is already available via rental on iTunes, and is set to hit DVD on February 21st, which you can already pre-order via Amazon here.  But we highly suggest that you rent it right now and watch it immediately. This film should be a prerequisite for all local bands to see to understand how true artists master how to perform a show and also to understand the hardships of the road ahead.

For us at Funkatopia, Fishbone deserves a place in the halls of funk fame for expanding the genre so widely and wrapping up true energy into one big ball of exceptionalism. And if you’re in Atlanta, make plans to see them live this Wednesday at the Masquerade in downtown because there comes a time when years will pass and you’ll say to yourself, “Man, I wish I’d have taken that opportunity to see funk/rock/ska/metal perfection on stage.”  Trust us.  You’ll never see anything like it ever in your lifetime.

We’ve even found a Fishbone mix below for you to enjoy. It’s a mix of song clips and then at 1:30 kicks in with true audio nirvana. Enjoy. Oh, and as for the documentary, we give it a rousing 5 out of 5 afros because there simply is no other band that has pushed through for the love of music more than Fishbone has, nor will there most likely ever be again. And this film does a magical job at capturing the full history of the band and will forever be etched into our library of great rock documentaries.

2 thoughts on “Review: Everyday Sunshine: The Story of Fishbone”