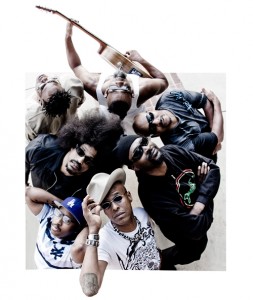 As we were trying to salvage an interview we had done with Fishbone’s Angelo Moore due to The Masquerade putting us in a room right next to the sound check area, it dawned on us that we were a part of something that may be bigger than even Fishbone realizes.  The concert in Atlanta on February 15th, 2012 was to a crowd of about 200 or so. It was very similar to the crowd that we saw when George Clinton and Parliament came into town.  Then after the Fishbone concert concluded, we realized that Fishbone is this generation’s Parliament.

Let’s very briefly cover the opening acts for Fishbone which were Heavy Mojo, Amul9, and The Supervillians. Heavy Mojo wasn’t even properly billed, but they were an incredibly talented new band in the area that is well worth taking note of.  They brought their hard rock rap combo in with full force that hearkened back to the early days of a similar “mojo” band by the name of Stuck Mojo, but much cleaner, funkier, and just….better. Regardless, we will definitely be watching Heavy Mojo closely and you should too. Check them out here. 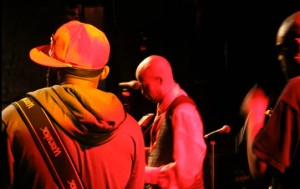 Amul9 had great energy, but a little less impressive following Heavy Mojo. Their hard edged rap-rock had good mass appeal.  It may have been a sound related issue that was their crux, but either way, their overall sound seemed too muddy to truly get the feel for their songs. Their recorded versions proved otherwise, as you can see here.  Their half naked guitarist has the marketing side down pat wearing a white mask the entire show and playing some amazing licks throughout. For rap-rock fans, this may be the fix you’ve been waiting for. There’s still polishing to do with their show, but overall, a pretty good showing for them and good lineup placement.

The Supervillians were in rare form playing a bevy of hits to a very enthusiastic crowd. Based in Orlando, their Atlanta fan base was out in full force doing sing-alongs pretty much all evening. While most all of their songs are about sex, drinking or smoking pot, they seemed to have found a comfortable party niche for themselves and are gaining some very notable traction.

If they keep the pace they’re on now, it won’t be surprising to see them on the full blown national radar in the same cliques as Jason Mraz or Pat Green. We briefly spoke with them at the show, so expect a Funkatopia interview to follow their next run through town. In the meantime, you can enjoy some of their tracks here. 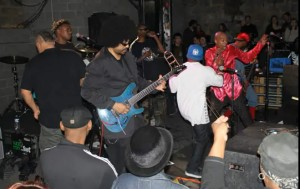 Now on to Fishbone.  Fishbone’s show was filled with their classic hits including Cholly, Everyday Sunshine, Freddie’s Dead, their newly refreshed hit Lyin’ Ass Bitch (thanks to The Roots fiasco) and many more including the show’s closing Sunless Saturday. It was evident in the beginning that Fishbone was set to create an experience for the night with Angelo Moore starting the show reading off his poetry piece entitled Mack Truck which he had also read for us during our interview.

The energy was non-stop and Angelo was on fire the entire evening.  For the most part, the crowd was in it to win it complete with mosh pits, stage diving, chanting, and singing along.  But as the night progressed, Fishbone outlasted the crowd as it began to thin out as the night wore on. Angelo’s voice held up for the entire evening and he is truly a master showman. 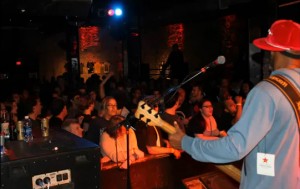 Bass player John Norwood Fisher or very simply Norwood, was also in exceptional form during the show playing amazing licks and thumps that had all musicians slack-jawed throughout the evening. His powerful presence on stage even with minimal movement is very simply a commanding performance. You almost can’t take your eyes off of him if you’re any bit musically inclined.

Walter Kibby aka Dirty Walt (trumpet) stayed notably set near the drums during the entirety of the show and only coming forward during his bit part performances, but he kept the continuity in tact during the show and his showmanship in a supporting role was very noteworthy and admirable.  Rocky George was tearing up the guitar solos with ease and he seemed laser focused the entire evening with not a missed cue.  His energy was equally evident which was probably due to his tenure with Suicidal Tendencies for over a decade. 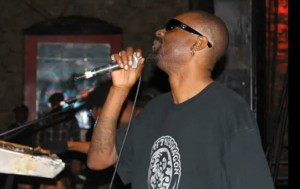 Drummer John Steward had a few technical problems throughout the set, but managed to keep the night flowing even amidst snare issues and technical difficulties. His solid drumming is a great energetic backbone to the band’s antics and not enough can be said about his solid performance.

Keyboardist Dre Gibson also turned in a hyped performance that got a little out of hand as the evening progressed due to, um, alcohol consumption, but even being fairly, stumbly inebriated, didn’t miss one lyric, vocal, or keyboard stab that we noticed and that is downright impressive. He also turned in more stage dives per capita of any band member for the night.

And lastly, trombone player Jay Armant stayed shirtless for the evening and did a lot of hopping around and bouncing, but looks as if he has truly found his place in the band even after a mere 3 months on the job. 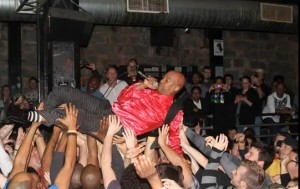 The sound was surprisingly clear with some minor feedback issues that were resolved in the first couple of songs, but kept raising its head a few times throughout the evening.  For the most part, the show was easily one of the most energetic that we had seen up until the encore.

We’re not sure what occurred, but the energy was very notably sucked out of the band during their 4 song encore. Angelo stood at the back of the stage during the entire performance of the show’s closing song, Sunless Saturday.  The crowd had also been decreased by about 60% at that time as well being that it was around 1am on a Wednesday night/Thursday morning. We assume that the crowd’s dissipation may have had something to do with band energy, but you could tell the energy was indeed sucked out.

All of that being said, what we witnessed was nothing short of the vibe and feel of a Parliament concert, from the frenzied energy of the crowd and the dedicated fanbase, to the band outlasting the crowd in every way. We honestly feel as if Fishbone are set to take the reigns for Parliament. Even George Clinton has taken note as evidenced on the upcoming release of Fishbone documentary, Everyday Sunshine: The Story of Fishbone.  While Fishbone doesn’t have the library of hits that Parliament does, they have plenty of material set to fill those spots and with their numerous collaborations, compilations and solo projects, they definitely have the wealth of material to build up the momentum. 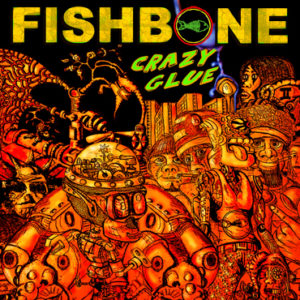 Even after 25 years of playing, Fishbone is still a band finding its legs and continually finding its identity. Their new EP Crazy Glue is a great collection of new songs and refreshingly quite a few of the songs found their way into the set and was very well received, and rightfully so. Fishbone’s groove is in the realm of funk and ska, and their audience loves it. While they’ve been on the road for a large part of their lives, it does finally appear that they’re gaining great traction and that we may be seeing an underground resurgence for them in the states.

Aside from any possible fallouts, which the band has been known to survive many a time, we truly see Fishbone setting themselves into a situation that will plummet them into the annals of funk-rock history.  We’re going to make a bold assumption here that Fishbone has at least another 20 years in them, even though they have had some tired moments.

Hopefully the new generated interest in them will rejuvenate the band. As for their Atlanta performance, we’ll give them a 4 out of 5 afros as we look forward to seeing them come through town again once the new Crazy Glue album gains more traction.  If they come through your town, we highly suggest you take it in. It’s an experience unlike any other.