The first brand new album from the baritone bass monster Larry Graham in well over a decade (almost 14 years) is full of his meatiest bass licks, a couple dashes of Prince and a splash of Raphael Saadiq. The end result is one of the newest funkiest albums in a very long time.

The 13 track funk opus brings Graham Central Station fans a whole new collection of songs and a couple of great reworks of Stevie Wonder‘s Higher Ground featuring great vocal arrangements and Al Green‘s It Ain’t No Fun To Me. The recording and mixing was split between Prince’s Paisley Park Studio in Minnesota, Studio de l’Hacienda in France and another mystery location identified as “It’s a Secret” located in Minneapolis. Hmmm.

According to Mr. Larry Graham, the purpose of the album was to compile the songs that got the best reactions from his audiences during his touring. Not to mention that fans of the bass master have been pining for an album for years and we’re pleased to say that this will bring those cries to a silence.

Graham recently told Bass Magazine that most of the album was recorded in the Summer of 2011 in France. “We’d been touring for the last couple years before I made my final selection of songs and put this record together. So I got a chance to see what works with live audiences. I got a chance to see what they like and what they want and what they react to. So this CD is a reflection of that – what the people want when we play our live show.” 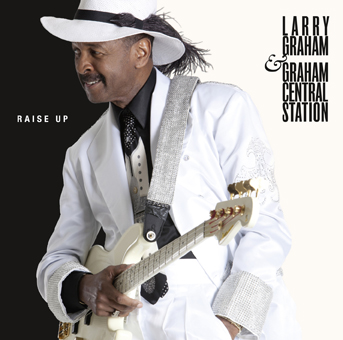 Larry shares some great new songs with his fans here that are compiled with a lot of thought in structure and delivery starting with the marching band drum laden GCS Drumline and then blow after blow of deep funk tunes that seem to really feel like a tip of the hat to the funk bands he’s served during his lifetime. From the upbeat and very Sly and The Family Stone-ish It’s Alright, the 80’s funk feeling Throw-N-Down The Funk, and the funk vocoder Zapp type styling of Now Do You Wanta Dance, you can’t help but notice the homage.

Prince contributes a lot to this album and even though Larry Graham shows as the producer of the 3 songs Prince appears on, his fingerprints feel very evident on those selections. Prince‘s background vocals are out front during the chorus of Raise Up and his new distorted guitar styling that he used heavily on LotusFlow3r are all over Shoulda Coulda Woulda, which is one of two slow jams offered on the album where Larry swoons the ladies with his deep baritone delivery. Then Prince shares his background and solo guitar work on the upbeat song Movin’ which again feels strangely like a heavy Prince production job although his name isn’t present in that capacity.

Raphael Saadiq (of Tony Toni Tone fame and his solo work obviously) lends his guitar and vocals to the albums closing track One Day. The song starts off at a medium paced delivery which diverts into a firm build up of “time to go to church” and also features Larry Graham‘s wife who lends her beautiful voice to the track as well.

The album also features nice segues such as the a capella Welcome 2 Our World and the aforementioned opening GCS Drumline which sounds just as you’d expect. The messages throughout the album are pretty clear and speak of living your life to the fullest and rising up against adversity before problems weigh you down. Most of the upbeat deliveries of the album morph into the party sound that brought The Family Stone to life back in the 60’s and 70’s. Of course, you can’t expect much less from the man that originated that thumping and plucking sound behind the bass during Dance To The Music, Everyday People and many other powerful funk classics.

In closing, we’re going to give this album a 4.5 out of 5 stars. The album officially hits the streets on September 25th and can be pre-ordered via the Larry Graham website here or on Amazon here. Song clips aren’t on the Amazon page yet, although the individual songs have clips that we’ve linked to throughout this review.

Most all of the songs clock in around 5 minutes or more, which means a lot of listening pleasure. Easily one of the best funk albums in a while from Graham Central Station that pays a perfect tribute to the various eras of funk music that Larry himself was the master of. This album proves yet again why Larry Graham is one of the best bassists of all time and firmly roots him into the psyche of bass players around the world. His influence on funk music and bass is forever known as the “thump heard round the world”.