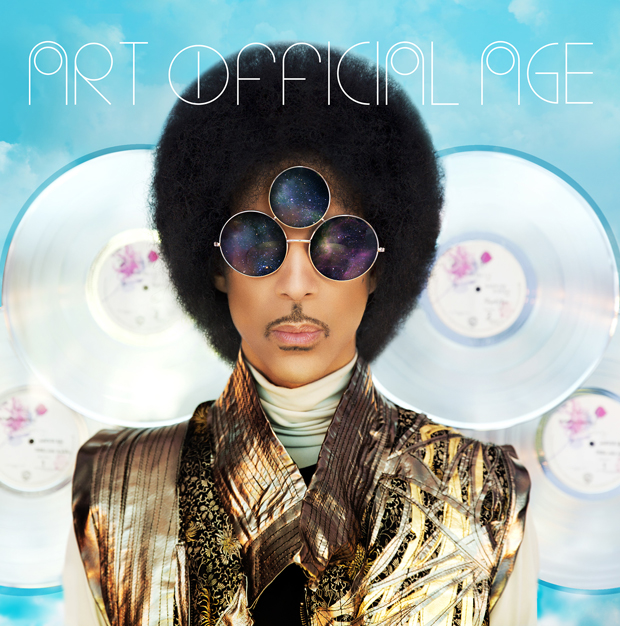 Prince‘s new album ART OFFICIAL AGE hits the streets next week and it’s worth the wait.

It was important for us to make sure that we got a really good listen early as possible to Prince’s new album because there would be a lot of expectations from fans and curmudgeons alike. Let’s just say that having friends overseas who can help you get a preview of the album not set to hit the streets in the U.S. until next week on 9/30/2014 is definitely an advantage. And now that we’ve heard it, our pre-order of both albums can’t get to our mailboxes soon enough.

One of the primary differences with ART OFFICIAL AGE is not that Prince decided to stay true to his sound direction, but that it really feels like there was a very hands-on selection by Prince of what tunes would appear on this album. Gone are the concerns that he has lost touch with his fans and that he “doesn’t have it anymore.”  ART OFFICIAL AGE will set those critics on fire and running for the hills.

The songs are fantastically structured complete with a futuristic story where Prince has awoken from a state of suspended animation 45 years later and the world is a very different place. His guide is the lovely voice of Lianne La Havas whose seductive delivery helps lure Prince back into consciousness and provides an orientation of what he can expect, as well as how to adapt into this new world that he has found himself.  She offers him a variety of tips such as “there are no such words anymore like me or mine”.

This theme is woven together through a few songs of the 13 track album and done so masterfully well, that you only find yourself wanting to listen to it all over again once your journey has come to an end. Not only do the songs lend themselves to the story, but Prince has also unveiled a side we haven’t seen in quite some time. The side that incorporates a wealth of segues, dialogue, and sound effects into the song structures to insure that you’re always aware that you’re along for the ride and holding hands with Prince‘s still foggy state of mind.

If we had to categorize the album as a child of two previous albums, we would have to give parental rights to 3121 and Rainbow Children.  ART OFFICIAL AGE is both thematic and dramatic at the same time, but also filled with grooves that will please the palate of both the funk and dance crowd and still delivers the sultry smooth ballads that swoon the ladies and bob the heads of the grown folk.

The album starts with an introduction from Prince announcing “Welcome home class, you’ve come a long way.” on the opening ART OFFICIAL CAGE which jumps around like a fish out of water from funky guitar riffs that sound as if they were basted in Nile Rogers barbecue sauce and then into a club thumper realm.

The album then slides into the head bopping CLOUDS which has already seen a pre-release and helps to initiate the tone of the storyline. These steady paced groove lines make a few appearances on ART OFFICIAL AGE and help to give the overall feel of the album the aforementioned “grown folks music” categorization. Songs like WHAT IT FEELS LIKE, BREAKFAST CAN WAIT and TIME lend themselves to the same family of steady BPM’s that ride the fine line of slow jam and heady slide grooves.

But then songs like BREAKDOWN (also pre-released) and U KNOW adequately fill the slow jam quota, but these aren’t just disposable efforts. These are well thought out sway thrillers filled with love drenched vocals that raise your blood pressure and have you setting your driver seat in the recline position. Get a listen and you’ll start loving the “rewind” button. There’s a hidden joke there you won’t get until you get graced with this album.

For funk fanatics, AOA delivers on many fronts including the thick bass lines of THE GOLD STANDARD that shares the stage with Prince AND a taste here and there of a familiar friend from the past. Bob? Ain’t that a bitch?

Then of course there’s FUNKNROLL which we featured on Episode 7 of the Funkatopia Radio Show (because no other radio station will) which also helps us funk fanatics put a feather in our cap and just be glad that we were represented in his purple majesty’s latest offering.

Prince‘s alter ego Camille makes a few appearances, but the dramatic additions that seem like they were “bong induced” really add a spacey-ness to the flow and feel of this album. The closing bars of THE GOLD STANDARD and pieces throughout like the aforementioned “rewind” in U KNOW create a very overall hazy feel that makes you feel like you were dipped in a honey glaze.

The AFFIRMATION I and AFFIRMATION II excerpts simply add segues to the album to keep the theme flowing, but AFFIRMATION III is a true brilliant diamond in the mix with a beautiful closing piece of moody nuances and powerful self empowerment messages.

In all, ART OFFICIAL AGE delivers on all fronts. We just can’t give this album any less than 5 out of 5 afros and not because it’s a funk classic bringing to the altar a wealth of funk music offerings, but because anything less would be a travesty for this fantastic album.

We won’t pretend to believe that radio will pick up any of these tracks simply because terrestrial radio as we know it is dead and they can’t embrace anything they’re not spoon-fed. Luckily for Prince, We completely get this album and it was well worth the wait, even if technically we’re still waiting. Get this album if you can or pre-order it without hesitation.

Be sure to read the new review for PLECTRUMELECTRUM as well.