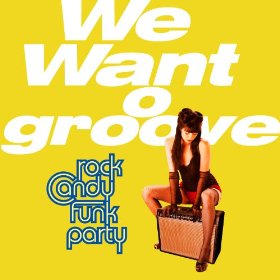 Players that performed with the likes of Prince, Chaka Khan, Eric Clapton, Sheila E., Stevie Wonder, Billy Idol, and many more gathered together for a few days to create a full album of funk lovingly called Rock Candy Funk Party.

Tal Bergman who has drummed for everyone from Rod Stewart to LL Cool J put together a collection of artists to create an album that would show homage to the funk of the 70’s and 80’s. He pulled in guitarist Ron DeJesus who has played with The Emotions and Tito Puente. Then he added keyboardist Renato Neto who most know from Prince’s NPG, but who has also played with Sheila E., Justin Timberlake and Christina Aguilera. Next up was classic rock God Joe Bonamassa who has shared the stage with Eric Clapton, Paul Rodgers (Free, Bad Company) and even B.B. King. Then on bass guitar he brought in the venerable Mike Merritt who most know as Conan O’Brien‘s bass player from the Max Weinberg 7, but who has also been with Stevie Ray Vaughn, Chuck Berry and Bruce Springsteen just to name a few.

The result is a 10 track album called We Want Groove that is filled with funk jams hearkening back to the 1970’s and 1980’s class of funk. The era that began to heavily blur the lines between jazz and funk forever distorting and scattering the genre into obscurity. Their job was to revive and redefine that funk era and they did so very well.

From the driving force of the opening Octopus-E (which you can get for free by the way), to the fast rolling Living Color‘esque Spaztastic, to the title track We Want Groove with its stabs that are eerily reminiscent of Prince’s Sexy MF, this completely instrumental album is filled with instant sing along funk classics. 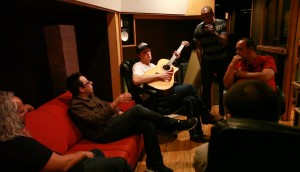 While most of the album’s tracks are hard hitting funktastic grooves, the collective also included a couple of slow jams to bring the energy flow in line with a full on joyride. Funk junkies who love to sing along to verse-less grooves will be in fatback heaven here. Most of the jams lack solos that muddy up the mix as if they feel that the groove is moving right along even though at some moments that is its detriment.

Case in point, Renato Neto who is truly one extraordinary player, doesn’t have nearly enough solo on this album to showcase his capabilities. Even drummer Tal Bergman got in a Madhouse style drum solo on the album’s track entitled Animal. But for Renato, a tickle here and quick tickle there isn’t anywhere near as much as most people familiar with his work to scratch the itch. We can only hope that there is more to come that will put Renato in his rightful glorified spot of righteousness. A second volume, maybe?

After multiple listens, it’s only 1/2 of an afro short of a perfect score. The missing half afro is for the two slow jams that go on a tad longer than may be necessary including the aptly titled The Best Ten Minutes Of Your Life that is a great song, but with not nearly enough variation to carry it beyond the 5 minute mark. The closing slow jam New York Song suffers the same fate although it is redeemed by a hidden track called Mr. Clean that kicks everything back into gear again,…at the ten minute mark.

All in all, this is a great funk escape that snags a very honorable 4-1/2 out of 5 afros. While most people will tune in for a variety of reasons, this album is a “must buy”. It’s a culmination of 5 of the best musicians at their craft bonding for a common purpose and that purpose is funk. We can’t think of a better reason to get together than that. Until Volume 2 of the Big Ol’ Nasty Getdown hits, this collective is the best thing going right now for funk fans. Run, don’t walk to the Rock Candy Funk Party. Great name by the way.