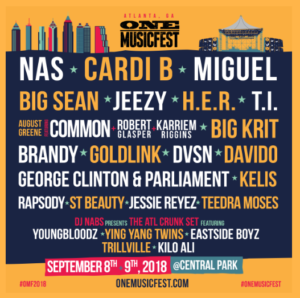 There are a lot of music festivals out there. Every month you can find one somewhere within a 4 hour driving distance of Atlanta. But the one we like by far in our part of the world is One MusicFest. Every year they seem to manage to get some amazing talent and last year brought out Jill Scott, Migos, Yasiin Bey‘s final performance, Too $hort, Ro James, Damien Marley and tons more.

The only negative was the horrendous location down at Lakewood which had the stages in what seemed to be a quarter mile apart. That made it impossible to catch the full acts since when one was ending, the next act was starting a 5-10 minute walk away which meant missing a few songs of their set as major acts were vying for your time.

Thankfully One Music Fest changes the venue.to downtown Atlanta in Central Park. While it’s yet to be seen whether the new location will be any better of a setup, the lineup is getting more impressive daily with already confirmed acts like Nas, Cardi B, Miguel, George Clinton and Parliament, Big Sean, Jeezy, Kelis, T.I., Big Krit, Brandy and so much more including the latest addition of H.E.R. and super group August Greene which features Robert Glasper, Common and Karriem Riggins.

Needless to say, it’s a wealth of talent that pretty will go unrivaled this year as far as a powerhouse lineup, but we’re looking forward to it.  General admission tickets will only set you back $125, but there are premium VIP and Platinum options for better views and amenities. They also have a 4 pack option that you can purchase for $400 that will save you over $100 if you have a gaggle of friends to go with you. Get them now before they go away.