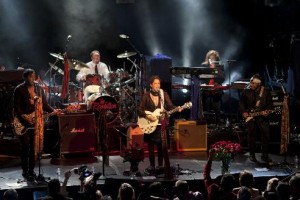 The place was First Avenue in Minneapolis. The famed venue that housed many of Prince‘s concerts was packed this past weekend with avid Prince and The Revolution fans and even though Prince was nowhere to be found, if you asked anyone in attendance, that was quite alright.  The event was a Revolution reunion of sorts for the first time since 1987, even though there was a mini-reunion of sorts in 2003 during Sheila E‘s tour. But this one was special because it was to help support awareness for the American Heart Association courtesy of a near fatal heart attack by the famed Revolution drummer Bobby Z.  You can read more about what led up to the creation of this concert here.

The reunion consisted of Bobby Z, Dr. Fink, Wendy & Lisa, Brownmark, Dez Dickerson and Eric Leeds. All of which was mixed by Prince‘s longtime soundman Rob “Cubby” Colby. Wendy Melvoin took the reigns at the front of the stage as the band powered through a wide assortment of hits from the band’s hey-day. She commanded the stage perfectly and was joined onstage by another Twin Cities performer named Greg “G Sharp” Sain that performs Prince songs regularly in the Minnesota area. He assisted with vocals for the closing number Uptown.

The set list was filled with tons of great tunes and consisted of the following (courtesy of Jon Bream from Star Tribune): Controversy / Do It All Night / Party Up / Let’s Work / Pop Life / America / 2 heart-health videos were shown and Bobby Z and his wife, Vicki Rivkin, gave brief speeches (“I want to thank Prince from the bottom of my repaired heart”) ; he presented the members of the Revolution with certificates for “Purple Rain” being inducted into the Grammy Hall of Fame / “Revolution Theater,” with each member reciting a line or two from “Purple Rain” / 1999 / Life Can Be So Nice / Mountains / anotherloverholenyohead / Baby, I’m a Star / Let’s Go Crazy ENCORE Purple Rain / Uptown (G Sharp on lead vocals)

Then if that wasn’t enough for the evening, The Roots drummer Questlove followed up with a 3 hour after-party set filled with Prince rarities from Morris Day & The Time, The Family, Mazarati and tons more.  We’re all very jealous that we couldn’t attend, but we’re sure that there will be many more photos to come. These are courtesy of Star Tribune photographer Jeff Wheeler. Enjoy.

If you’d like to purchase any of the above photo reprints or see more pics, reach out to the Star Tribune here.

5 thoughts on “Photos & Setlist: A Prince & The Revolution Reunion (Without Prince)”