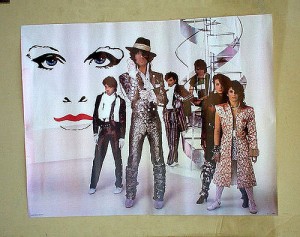 Legendary Prince & The Revolution drummer Bobby Z has put together a show for February 19th at First Avenue in Minneapolis that will bring the Revolution back together sans Prince to benefit heart-health awareness and the American Heart Association.  Tickets go on sale November 21st, 2011 and will probably sell out very quickly.

Bobby Z suffered a major heart attack on January 30th and was hospitalized for several weeks and it proved to be a major wake up call for him. “I was trying to think of something to do around the anniversary date of my heart attack.  In my new consciousness, I said, ‘What’s the biggest thing I could do?’ Prince and the Revolution. The second biggest thing is the Revolution.”

The show will bring together Bobby Z, Wendy Melvoin, Lisa Coleman, Dr. Fink, and Brownmark. The drummer stated that it will be a very laid back evening and that “there’ll be a lot of music and stories and some education about heart disease.”

Any “surprise” appearances? Bobby Z stated that while Prince has been very supportive and hasn’t indicated either way, he’s touring all of the time including his Canadian tour and various appearances such as the show with Nicki Minaj at Versace.  There are no promises although the invitation is wide open, however there will be an appearance from long time Prince saxophonist Eric Leeds.

Tickets go on sale on November 21st and you can get more information at http://www.first-avenue.com.

2 thoughts on “A Revolution Reunion, Without Prince”