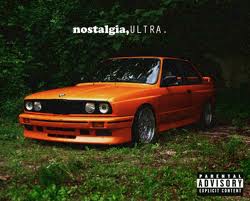 Frank Ocean is a very rare breed, but not as much as one might think.  Frank is a member of Odd Future (aka Wolf Gang aka OFWGKTA aka Odd Future Wolf Gang Kill Them All).  If you heard the two separately, you wouldn’t even put the them together or even possibly imagine that Frank Ocean was a product of the over the top antics of Odd Future. Frank has written songs for Brandy, Justin Bieber, and is working with Beyonce, appears on the Kanye West / Jay Z Throne album and will obviously appear on Odd Future team mate Tyler, The Creator’s Goblin album, which is a very dark and violent rap album and a world and a football field away from this offering from Mr. Ocean.  All before the age of 25.

Frank’s release of his solo album nostalgia, Ultra was distributed by OkayPlayer for free some time back and is extremely reminiscent of early Bilal releases.  The overall spacey grooves that fill the album are layered with incredibly smooth vocals, very occasional slight auto-tuning, and nary a dance tune among the mix. The closest upbeat material on the collection are the songs entitled Songs For Women and lovecrimes.  The standout track that has an opportunity to get some major radio play would be American Wedding that unapologetically uses The Eagles Hotel California as its base melody throughout the entire song complete with the entire guitar solo as he swoons about marriage and divorce.

From a funk quotient, there’s not any hard funk here and not by any stretch of the imagination. The primary reason we even offered to review it even though it’s non-funk related is because it’s got great grooves and it’s free. Yep. You can get it from here; https://s3.amazonaws.com/Mixtape_Zips/nostalgia_ultra.zip . If you find the link broken, you can simply Google “frank ocean nostalgia ultra download” and find a wealth of backup locations.

This is a great love song collection that rivals any slow jam artist out there with tastes of that off-kilter Bilal bizarrity at sporadic points all broken up with the sound of a cassette tape player being stopped and started.  The main reason being that the collection was presented as a “mix tape”.

This is a really good collection of songs and shouldn’t be seen as anything other than a great sex mix.  From an album perspective and what it’s worth, we’d give it a 4 out of 5 for what it intentionally accomplishes and that’s what you should focus on if you could care less whether or not it’s funky. But from a Funkatopian perspective, we’re forced to give it a 2.5 out of 5 because of the lack of any funk even though it has some nice grooves on it which may actually appeal to some funksters.  Why did we review this again?